MLA Imo distributed gas cylinder and stove along with connection document on Saturday to women of his constituency as gifts for the upcoming Ningol Chakkouba. 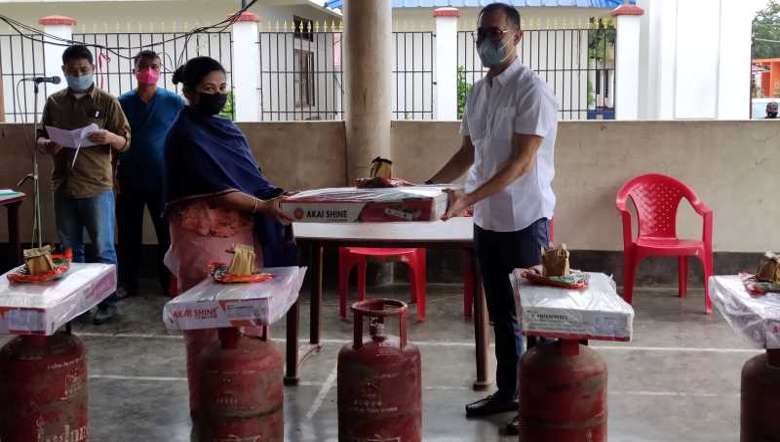 Independent MLA of Sagolband assembly constituency RK Imo Singh on Saturday charged that the political instability created by the Congress party in the state and within the party itself led to holding the by-election.

Imo, who was recently disqualified by the Congress party from party membership, said that the corrupt politics played by some leaders of the Congress party has created political instability in the state. As an outcome, many Congress members decided to leave the party or resign from their MLA post, he said.

The MLA was speaking during distribution of gas cylinder and stove along with connection document on Saturday to women of his constituency as gifts for the upcoming Ningol Chakkouba.

Imo said that the situation necessitates the by-election despite the ongoing pandemic.To conduct election to resume stability in the politics of the state regardless of time and situation is the need of hour, he added.

“My political career being raised up from Congress party, I myself feel bad to criticise the party. The party is very good and I like their ideology and principle. However, I along with some colleague can no longer tolerate the cheap politics played by some senior leaders,” he stated adding that it would be wise to reinvestigate the major reason behind their declining power in the state instead of pointing fingers and comparing with other parties.