The first day of the strike call affected most of the Muslim-inhabited areas in Manipur. 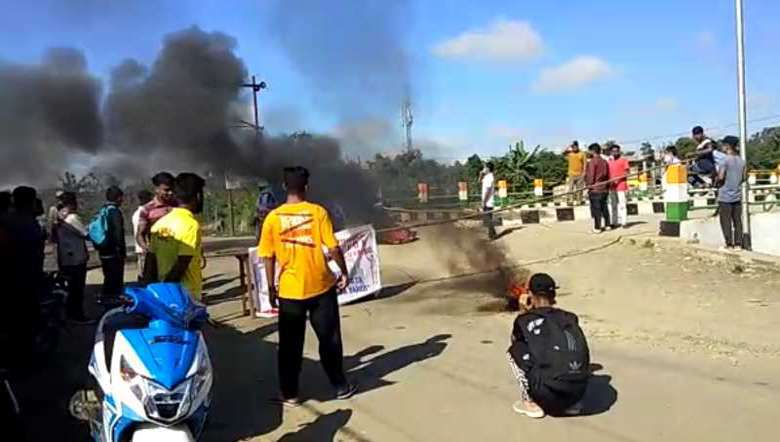 The first day of 48-hour general strike called by two student bodies demanding implementation of four per cent seat reservation for Meitei Pangals (Manipuri Muslims) in higher education affected most of the Muslim inhabited areas in the state and left three protesters injured on Thursday.

Meanwhile, no amicable solution was able to be reached between representatives of the two student bodies and the education minister regarding their demand of seat reservation for Meitei Pangals in higher education.

Since Thursday early morning, most of the roads, including highways. were blocked by protesters and supporters of the general strike.

The Imphal-Moreh national highway was blocked at Lilong Bazar while Hatta road was also blocked by protesters. Some parts of Muslim inhabited areas, including Kwakta, Lamlong Bazaar, Sangaiyumpham, Mayang Imphal and Yairipok, Khabeisoi were also affected by the genral strike in the early morning.

Tension erupted in Hatta area when some of the protestors were detained by police. Following the detention of the protestors, locals of the area came out in large number and demanded release of the detainees and the strike turned violent.

A mob gathered in the area. To control the situation, police fired tear gas shell and mock bombs to disperse the mob. The detained protestors were, however, freed later.

Meanwhile, some of the tear gas shell and mock bomb blasted inside the premises of Lilong Bari Jama Masjid.

Speaking to the media, one of the priests strongly condemned the firing of tear gas shell and mock bomb inside the premises of the Masjid. He contended that the firing of expired tear gas shell could result in unwanted incidents and health hazards instead of dispersing the protestors.

Later in late evening, a team of the two student bodies met education minister but no amicable solution to the demands was reached during the talks.

General secretary of AMMSO, Yunnus told IFP that the representatives are waiting for an appointment to meet chief minister N Biren. He further said the general strike will be immediately withdrawn once the demand is fulfilled or an amicable solution is brought with government.

No updates on whether the representatives met the chief minister was received till the filing of this report.