All the items were recovered at 5:50 am on Thursday by the police team. 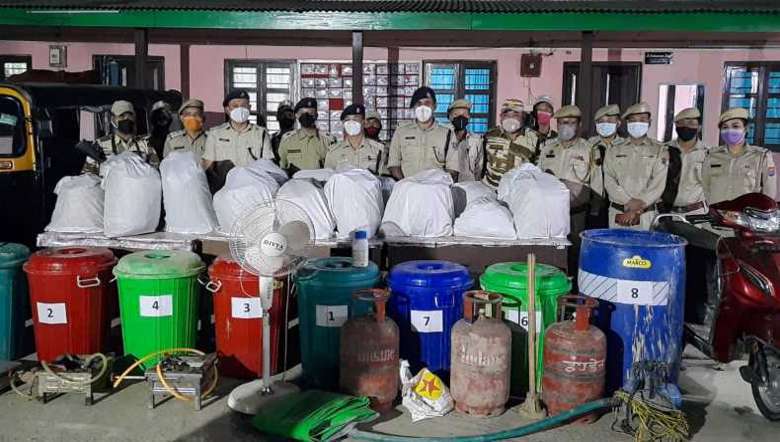 Thoubal District Police busted brown sugar manufacturing laboratory at Thoubal Moijing Awang Leikai and seized around 435.945 kg of suspected brown sugar, 438 litres of morphinated liquid along with many other items on Thursday.

According to police, after receiving reliable information that some contraband drug items are being manufactured at the residence of Md Kayamuddin alias Amuthi, 34, son of Habibur Rahaman of Thoubal Moijing Awang Leikai, presently at Phundrei, a combined team of Thoubal District Police rushed to the said area.

When the police team reached the house, Kayamuddin, his wife Athotpi and their associates had already escaped but several items were seized, said the police.

The police team also seized one Bajaj Auto Rickshaw black in colour bearing registration number MN04G-0489, one Honda Activa red in colour with no registration number plate, two Aadhaar cards in the names of Kayamuddin and Athotpi and one driving license in the name of Md Amir Hussain, son of Md Habi of Moijing Awang Leikai which was found inside the tool box of Honda Activa.

All the items were recovered at 5:50 am on Thursday by the police team comprising of additional SP (Law and Order) of Thoubal, Lakshay Sharma, additional SP (Operations) of Thoubal, Sachidananda Soibam, OC of CDO Thoubal Unit, N Tikendra Meetei and a team of Women Police Station, Thoubal led by OC, Okram Chaoba Devi under the supervision of SP of Thoubal, S Ibomcha Singh. Later, the items were handed over to OC of Thoubal Police Station for further necessary action.