Highway departments need to collaborate with the related departments of universities and other experts in the field. Latest technologies used in road construction should be studied to find suitability in Manipur’s context. 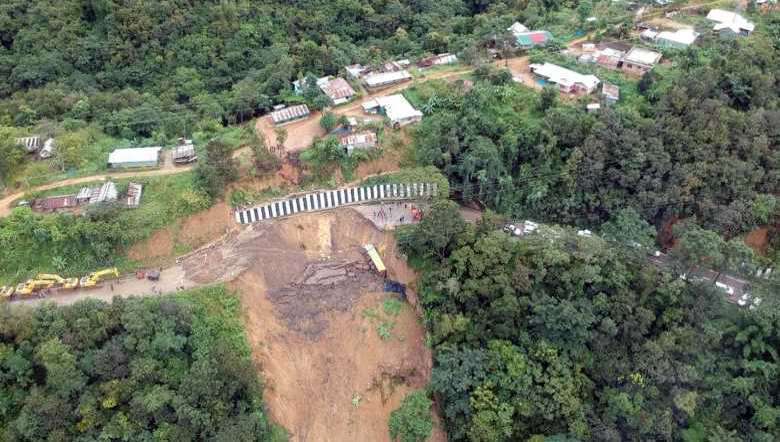 The Imphal-Mao sector ofNational Highway No 2 which was cut off after a 50 metre long portion sank atKhongnem Thana about 15 km away from Maram last Friday following incessant rains has finally been linked and traffic resumed on the highway from Wednesday morning. The state breathed a sigh of relief as the highway blockade triggered by natural causes had already begun to take its toll with transportation of essential commodities coming to a complete halt and prices spiralling out of control. The Imphal-Jiribam highway could not be trusted for the time being to be an alternative highway or carry the load of traffic of essential commodities, The agency entrusted with the construction of the highway from Mao to Koubru Leikha BIPL needs to be congratulated for the speedy revival of the highway by constructing a new stretch of road in place of the sunken portion. Earlier, it was estimated that the construction of the new stretch would take about 10 days. But, they have been able to once again link the highway earlier than estimated with full support from the state PWD officials. For this feat, both the PWD officials involved in facilitating the new route and the BIPL officials need to be congratulated and rewarded by the state government. Sometimes, a tap on the back for a job well done goes a long way and the state needs to set an example for such commendable work. Who knows, what issues and difficulties might have developed if the work was delayed for a longer period.

Manipur’s highways has always been in the news for all the wrong reasons. Not to talk of the lethargic progress in road construction activities whichever agency handles the highway stretches, the frequent landslides and soil condition of the state has added its share of difficulties. One does not talk of the frequent man-made highway bandhs and blockades anymore, as the BJP led government has succeeded in preventing it through a pro-active approach. According to experts, generally Manipur’s soil is loamy sand to silty clay loam. It has less water holding capacity and is dry in nature. Chemically acidic soil abounds resulting from the washing down of the salts in rainwater and also on account of leaching effect. The rock system is weak and unstable prone to frequent seismic influence. The state is also seismically active and characterized by frequent landslides. It is not only in the Manipur sector of the highway network, but in Nagaland sector also particularly in the Zubja area, where the highway traffic is frequently disrupted by heavy landslides.

So, technological intervention or innovation is very much required in road construction from now on. Systematic, well-designed research provides the most effective approach to the solution of many problems facing highway administrators and engineers. Highway departments need to collaborate with the related departments of the universities and other experts in the field. Latest technologies used in road construction should be studied to find suitability in Manipur’s context. This would go a long way in building a good road and highway network for the state including the interior and border areas and maintaining it. With a good road and highway network, other developmental activities will naturally follow besides reducing the hill-valley gap in development perception. It also entails the reach of governance to the remote frontiers and increased social interaction between the various communities of the state. Herein lies the real mission of the Go to Hills campaign started by the N Biren government beginning in 2017 March.