The United Club Organisation has given a five days deadline to the authorities concerned to start the road construction. 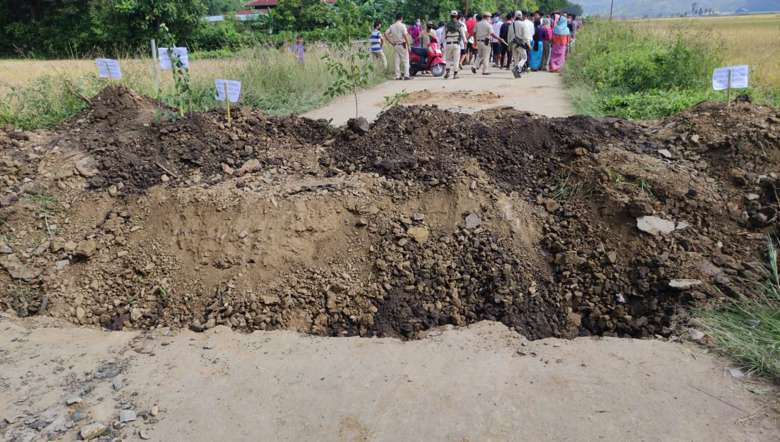 A large number of irate villagers including women of Salungpham village under Heirok assembly constituency dug out Salungpham-Wangjing IVR road on Tuesday morning by using an excavator. The villagers expressed disappointment at the local MLA and other authorities concerned for not constructing the said road for the last six years.

The umbrella body of all the clubs of Salungpham village, the United Club Organisation (UCO) has given a five days deadline to the authorities concerned to start the road construction.

The villagers made a large pit along the road at Salungpham near Kairembikhok thereby the village remained totally cut off from other neighbouring villages.

A large number of villagers led by UCO gathered at Salungpham Mamang Leikai Panthoibi Market on Tuesday early morning and carried out a protest rally from there. Slogans were shouted saying, “Separate Salungpham Village from Heirok AC”, “Construct Salungpham Road Immediately” and others.

When the protesters reached Salungpham Maning Leikai Ngatensoi Bridge, a team of Heirok Police Station led by OC N Premjit stopped them stating that the district has been enforced with CrPC 144. However, the protesters marched towards Salungpham-Kairembikhok boundary and dug out a large pit by using an excavator.

President of UCO, Salungpham Phuritsabam Braja told the media persons that UCO had been demanding to construct the road for the last almost four years but no positive response was given by the authorities concerned till today and so the organisation is compelled to carry out agitation. He continued that occurrence of road accidents is consistent in Salungpham-Wangjing road due to its deplorable condition. Many pregnant women had to face a lot of hardships while going on this road for their routine check-up at hospitals, he added.

Braja further stated that the people of Salungpham village want to be separated from the Heirok assembly constituency as there is no development in the village so far. There is not a single government high school although the village has a population of more than 10,000 people. Moreover, the health sector and water supply scheme have also completely failed in Salungpham, he added.

Meanwhile, it is reported that police have filled up the pit which was dug out by the irate villagers at noon.