CPI protests against price rise in essential goods in Manipur

The CPI slammed the Biren Singh-led government for failing to check price rise. 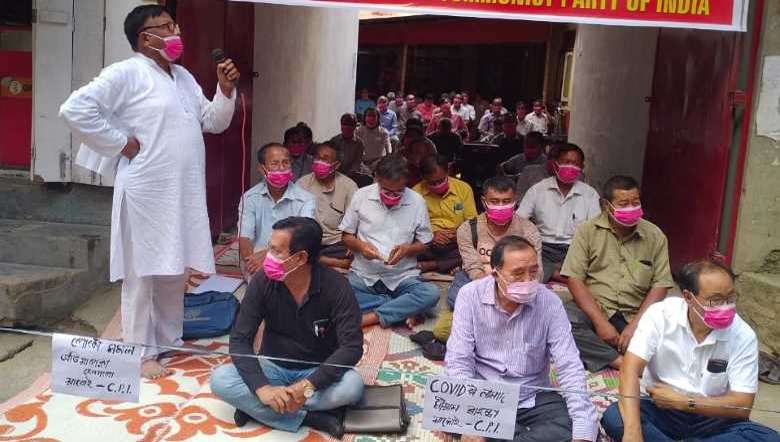 The Manipur Communist Party of India on Tuesday staged a sit-in protest demonstration against price rise of essentilal goods amid the surging pandemic in the state.

Leading the protest in Imphal, CPI state secretary, L Sotinkumar stated in a release that businessmen have increased the price of essential items in the state but the state government has failed to check it. As such, people from the hill and valley districts who have no place to earn during the pandemic are suffering.

The Left party stated that the number of COVID-19 cases is surging in the state. But the BJP government is busy campaigning for the assembly by-election by violating the guidelines given by the election commission.

While noting that many paddy fields have been flooded or affected by the heavy rainfall in the past few days and that the paddy may not be in a condition for harvesting, the release contended that the chief minister has turned a blind eye to such situation.

The release stated that student organisations, civil voluntary organisations and political parties should collectively raise the issues before the condition gets worse. Alrhough Central BJP leaders assured of developing the Imphal-Jiri road during the state assembly elections, they have failed to implement their assurance till date. Besides, UGs are also extorting money as tax along the highways and they have even assaulted some drivers, it added.