"Saving paddy land is saving Manipur," the protesters cry out. 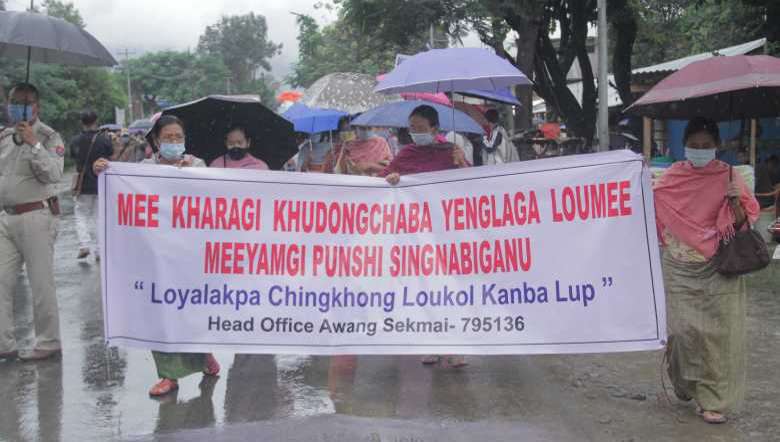 The state government had proposed an agricultural land acquisition plan to shift the Central Security Force personnel stationed at Koirengei Airfield to 3- Keingam under Loyaklakpa Chingkhong Loukon. Opposing it, a huge number of protesters held a rally and sit-in protest demonstration in the rain at Awang Sekmai on Friday, holding placards with the slogan – ‘Save Paddy Land’ and ‘Saving Paddy Land is Saving Manipur’. 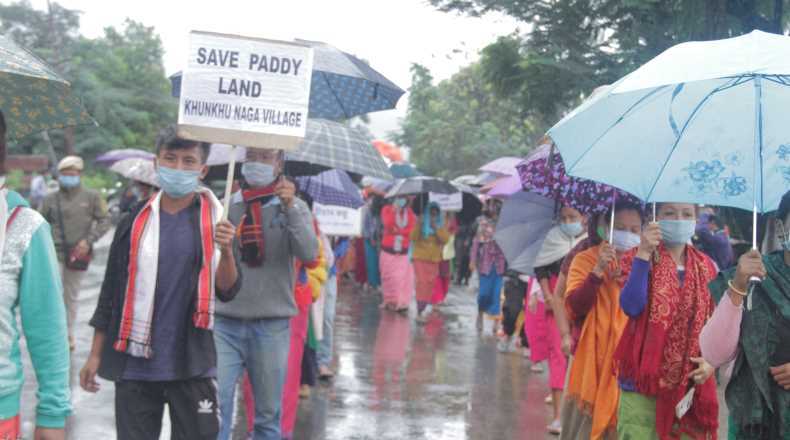 The present government can be considered a ‘totalitarian government’ if it goes ahead with the plan to shift the Central Security Personnel Station to 3-Keingam despite the protest by the locals, Loumi Sinmi Apunba Lup(LOUSAL) president Mutum Churamani said at the protest site.

Pointing out that ending poverty and hunger everywhere by 2030 is a part of the United Nations agenda for sustainable development, Churamani contended such a plan of the state government to use paddy fields for other purposes will not help in making the state self-sufficient and will not reduce hunger.

“I own a paddy field at Keingam and it has been a source of livelihood for my family. However, after knowing that the government has a plan to shift Central Security Forces stationed at Koirengei Airfield to 33- Keingam, I do not know what my future holds,” a local of Awang Sekmai, Usham Ningol Amubi said.

Another local, Angom Rajesh said that people of Keingam will never accept the government plan to shift the Central Security Personnel stationed at Koirengei to Keingam. He claimed that in the past, locals have donated land to the state government and they have not received compensation till date.

Although the Manipur Conservation of Paddy Land and Wetland Act 2014 had been enacted, it has been observed that construction of buildings and other structures have been on the rise from the year 2017 to 2020, Churamani said.

The protesters submitted a memorandum to Chief Minister N Biren Singh through Sekmai SDC. The memorandum stated the paramilitary forces if moved to Keingam would affect a large number of farmers and villagers who depend on the agricultural land at 33-Keingam.