Mayarser swam across the strong river current and rescued the stranded persons to safety. 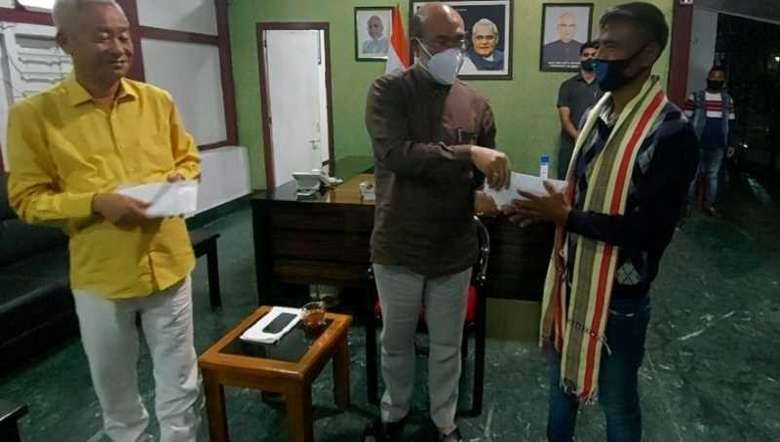 Chief Minister N Biren Singh has honoured Mayarser T Shimray of Chingjaroi Ngachaphung, Village Ukhrul District with cash reward of Rs 1 lakh in recognition for his brave act in saving lives of four people who were stranded in a truck in a river at Chingjaroi Village on October 22.

On October 22, Mayarser saved the lives of four persons who were stuck in their truck inside the river. He swam across the strong river current and rescued the stranded persons to safety.

CM N Biren Singh stated that he will recommend his name to the State and Central Government for bravery award. He lauded the sacrificial spirit of Mayarser T Shimray and handed over Rs 1 lakh from CM's Relief Fund. He added that the state will also honour him in an appropriate time.

MLA Khashim Vashum while lauding his noble act stated "Jesus died for us and that is the greatest sacrifice he made for the sinner. Likewise, Mayarser T Shimray inspite of knowing the risk involved risked his life to save four persons who were stranded in the truck inside the river."

Mayarser, while interacting with this correspondent, expressed immense gratitude to CM N Biren Singh, MLA Khashim Vashum and Former Deputy Speaker, Preshow MK Shimray for their generosity in recognising his act. He stated "this is my first visit to Imphal. I could not sleep last night thinking about the journey I was going to undertake. I could not speak Manipuri, Hindi or English. I was excited and at the same time I was nervous. I thanked God for this memorable journey of my life. I would forever cherish these moments.”

While saying that he got many phone calls from well wishers, he said, “I never expected that my small act will take me this far. I am a simple village guy and at one point of time, I was worried when I received so many phone calls. I would like to thank God and everyone who encouraged me during this time of unexpected happiness."