Due to the incessant rain in the last few days as the water level in the river has been rising rapidly. 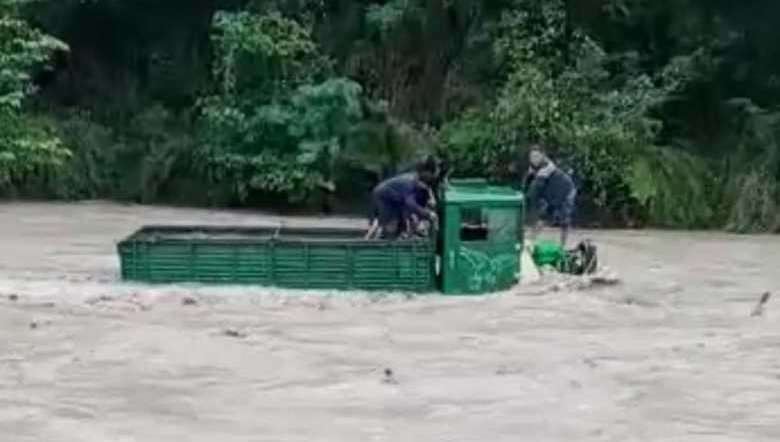 In a daring act, a farmer from Chingjaroi Ngachaphung village, Ukhrul district rescued four persons who were stuck inside their truck in the river due to the incessant rain in the last few days as the water level in the river has been rising rapidly.

Speaking to this IFP correspondent, one Mayarser T Shimray narrated that “he was waiting for the rain to stop and has been staying in a hut at his paddy field getting ready for the harvest. Four persons from Talui village who had come to collect sands from the river, the driver and one of his friends had visited him for tea in the early evening at around 4 pm and returned back to their truck, while the rest were loading sands. The water level of the river started rising rapidly and the truck got stuck in the river.”

“I got a call from the driver that his shaktiman truck has been stuck in the river and they could not move out to the shore through the rapid flowing of river. By the time, I reached the riverside, a crowd from the neighbouring fields had gathered but none of them was willing to go into the strong river current. In the meantime, I called up chairman of Ngari village, Hopeson to bring a rope for rescuing the people. Hopeson came with low tension electric wire by 8:30 pm and then I swam towards the truck and rescued the people back to the river side by holding the wire. The rescue strongly was involved by the people on the river side who held one end of the wire,” narrated Mayarser.

Mayarser is 48 years old, a cultivator from Chingjaroi Ngachaphung village. He is a father of six children. It was only through his bravery and with help from the people in the area, four lives were saved. The incident happened on October 22 at Anjarala River of Chingjaroi Village.

The driver of the truck, Vareiyo Vashum said that the truck got stuck in the middle while they were driving out of the river. Suddenly, the water level started rising rapidly and the water current became stronger with lots of debris floating around.
“We were scared of swimming in such a strong current and asked for help. We made a lot of calls, and finally, people started to gather at the river side and we were rescued. We might not have survived had we tried swimming across the river. We are very grateful to everyone who helped us, especially, Mayarser who risked his life to get us to safety. The truck is still stranded in the river and they are waiting for the water level to subside,” said Vareiyo.