Playing with fire over NSU land may result in communal conflict 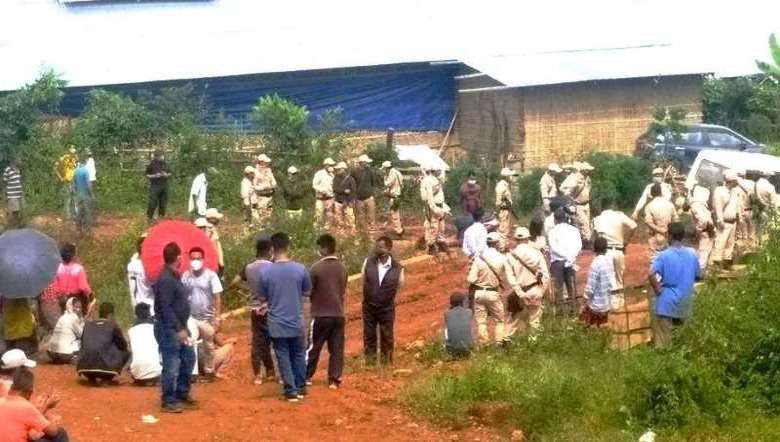 The land for NSU unfortunately continues to be mired in controversy and conflict. This causes delay in the start of the work of construction and in a year or two it would not be possible to accommodate the classes in the temporary campus at KLSC; which is also utilised by the NSA and the Regular Coaching Centres. NSU cannot appropriate the whole infrastructures at KLSC as NSA and NSU are providing training to young and elite sportsperson for competition. Thus the earliest settlement of the land and urgent construction of the NSU Campus at Haraothel should be the topmost priority.

The differences of views that it is in Imphal West or Kangpokpi should not have been an issue and should have been settled amicably. In the cadastral map, it is included in Imphal West and thus there cannot be any conflict on this point. Further, by a series of Darbar resolutions in 1928-32 nearby uninhabited hills were earmarked for use of the usufruct by the neighbouring valley villages which are called the valley forest reserves. These nearby hills were unpopulated during those times and there was no controversy when this reservation was made. Many of these reserves with time came to be inhabited by various tribes. These reserves then were surveyed and allotted Dag Chitha numbers and the land belongs to the State while the neighbouring villagers were allowed to use the usufruct. Haraothel, then called Harao Chingsa, was allotted Dag No. 270 while Harao Ching was allotted Dag No. 266.

No one can claim that the land in question is a patta land and all must accept that it is khas land, that is government land, and thus the question of who donated the land cannot be an issue. No one can donate Government land and the State rightly allotted the land for NSU. Nearby villages may at the most, issue No Objection Certificate but they do not have any right whatsoever to donate the land as they have no title over the land. The claims of the two valley villages and the one Hill village that they donated the land are frivolous, irrelevant and downright false. This is what is called “Mapu nattana mapu saba”. The name of the Hill village claiming it is L Tangnaum with L standing for Lailon Vaiphei the original village located in Leimakhong area and the handle Tangnaum itself reportedly indicate that it is a new sub-village “khunou”.  In fact, it is only recently that one learnt that the Chief of L Tangnaum had donated the land; earlier there were no such references.

On the other hand there is another claim of ownership of the land which was made by Konsakhul. However the supporting documents referred to by Konsakhul and L. Tangnaum are the same. Orders passed by PMSD in Hill Misc case No. 388 of 1920-21 dated 06.12.1920 signed by C. Gimson; Order signed by R. Khathing, Minister i/c Hills dated 02.07.1948 in Hill Minister Misc Case No.94 of 1947-48; Order signed by M. Nabakumar dated 08.11.1950 in the Court of the SDC Sadar and Thoubal in Hill Cril Case No.121/S + Th. Thoubal and Order signed by RP Bhargava dated 07.08.1953 in Hill Cril Appeal Case No. 5 of 1953 in the Court of the Chief Commissioner. Since court decisions have been referred to, it is the responsibility of the State Government to verify the records, so that justice is carried out as documents just could not be swept under the carpet. These documents need to be examined as to its relevancy to the present land and the context of the decisions and appropriate decision taken. The inclusion of Haraothel in the village list under the then Senapati District in Census 2011 also need to be taken into consideration. It may however, be pointed out that when the districts were separated, names of some villages were included in both the hill and valley districts. The reason is that the unsurveyed portion falls within the hill districts while the surveyed portion in the valley districts and there should not be any conflict or misinterpretation.

As reference was made to an order of Major Khathing, a small anecdote is perhaps called for. When he was alive, this author queried why he contested the 1948 elections from Kangpokpi. He asked me the reason for the question and followed up with his interpretation of it as to why do a Tangkhul from Ukhrul come to contest in Kangpokpi, a Kuki dominant area. He smiled and told me that the large number of Kuki villages in the K-K Forest Reserve area is a recent phenomenon and during that time they were only a handful of Kuki villages in the region and there was no misunderstanding between the Naga and the Kuki; and in fact the conflict then was mainly between the Old and the New Kuki, so much so that Teba Kilong was the only Minister who is not a graduate. The graduates among the Kukis all belong to New Kuki, and the Old Kuki fought like hell to ensure that no New Kuki are made a Minister though TC Tiankham became the Speaker.

The situation has come to such a pass that to buttress their claims, unauthenticated documents was uploaded in the social media including those with the signatures of ministers, which were claimed to be forged, and investigation is reportedly on to find the culprits. Such mischievous acts must be penalised severely as it is playing with fire as it may lead to communal conflict; a conflict where logic is thrown to the wind. Even unrelated events of local conflicts were attempted to be brought under the omnibus conflict for NSU land issue. But sagacity prevailed with such local conflicts being settled separately and those which try to raise issues from outside must think twice to avoid any further escalation on the matter. It is sad that property built with public money was destroyed, not realising that public property is built with our money. Besides creating tension between communities and with the state force, leading to injuries among the people, it is totally avoidable during this time of the Covid-19 crisis, when all have to fight together the common enemy.

Leaving the issue of the decision of where the land is located, the work of construction of NSU must start in earnest and this year working season must be utilised to the fullest. In this regard, all the nearby villages must commit that there will be no interference in such construction works and leave to the state government to decide in which district it falls based on records and while issuing such an order, reasons for the decision is mentioned in detail for all to understand the rationale behind such a decision. Calling of bandh etc on this issue is totally unjustified as it will only be a handle to shift the headquarters of NSU from Manipur. The achievement of Manipur in the field of games and sports is the sole factor why NSU was located in Manipur and such achievements must also be honoured by every person in the state, irrespective of which community he belongs and all should strive in unity to ensure that NSU comes up in the identified location.