'We must collectively strive to build a safe and secure environment for girls and women in the State'. 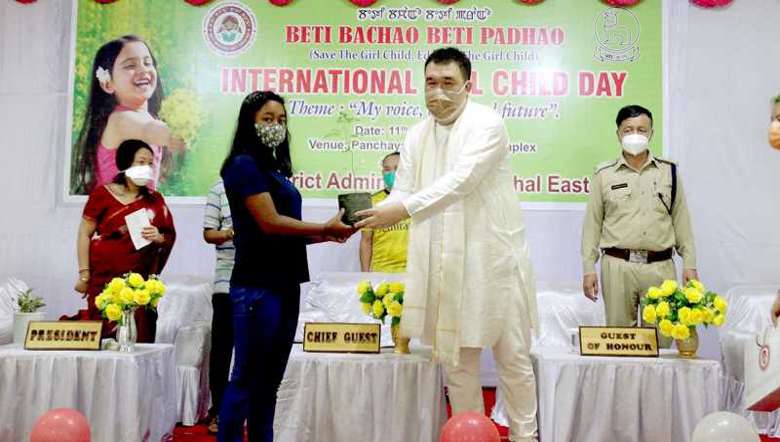 Manipur Social Welfare Minister Okram Henry has called upon the people of the state to join hands to eliminate and eradicate all forms of discrimination against girl child in the state.

Speaking as the chief guest at the observation of International Day for Child girls and Beti Bachao Beti Padhao campaign held at DC complex Imphal east on Monday, the minister said that collective effort is a must to improve the social, political and economic status of women in the state.

“We must collectively strive to build a safe and secure environment for girls and women in the State,” Henry said

Saying that the female literacy rate of the State is above the national average, he stated that the status of women in Manipur is relatively better compared to other states of the country. He also said that Manipuri girls have outshined boys in various competitive examinations including those conducted by UPSC. Besides, many top posts in both government and private sectors are held by women in the State, he added.

The minister further appealed to the civil voluntary organisations, local clubs, non-government organisations to organise awareness and sensitisation campaigns so as to bring gender equality in the State.

Expressing concern over reports of various unwanted incidents an crimes against women in the State, he sought cooperation from the public to prevent such unfortunate incidents in the future.

On the occasion, the minister felicitated four girl children excelling in different fields with a cash prize of Rs 5000 each, gift pack and plant saplings (Drum stick plant). Another 35 girl child were also honoured with gift packs and one tree sapling each.

Deputy commissioner of Imphal East Khumanthem Diana, superintendent of police of Imphal east Haobijam Jogeshchandra, officials of district administration and others were present during the function.