MLA of 45-Chingai assembly constituency, Khashim Vashum has reached out to the villagers of Marangphung with an initiative to sustain their livelihood in the coming days. 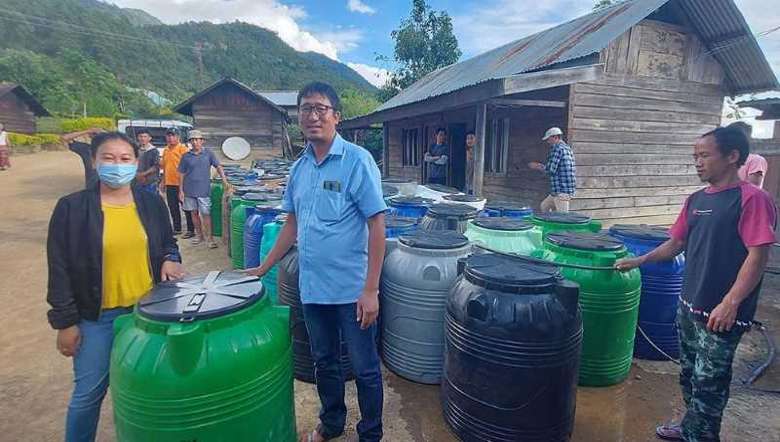 Eighty households of Marangphung village in Ukhrul, Manipur looks forward to a project that will brighten their future.

Amidst the hardships faced by the people due to COVID-19 pandemic, MLA of 45-Chingai assembly constituency, Khashim Vashum has reached out to the villagers of Marangphung with an initiative to sustain their livelihood in the coming days.

The project, which is entitled as ‘Inclusive Development for Social Change’, has been a long cherished dream of the people of Marangphung. It was supposed to be a five year plan (2016-2021) and the villagers had already started to work but due to various reasons, the project has been delayed. Sensing the need of the villagers, the local MLA has stepped in to fulfil their dream. As a part of the project, Khashim also distributed 64 plastic water tanks (Sintex) to the villagers on Sunday.

While speaking to this IFP correspondent, Khashim stated that he will extend every possible help in materialising the project.

When the IFP correspondent interacted with SA Ramnganing, the headman of Marangphung village, he informed that the project has been delayed due to limited resources but with the help from the local MLA, it is finally coming into fruition. He continued that the village gets water throughout the year from its main source at Tofunra Stream.

Blessed with this perennial source, the villagers have surplus water which would be diverted to the project area at Marokathok for community projects like fishery farming, paddy field, escargot and duck farming, he added.

He also said that the villagers will get water supply from 5 am to 6 pm everyday for their daily consumption and during the remaining 11 hours, the water would be diverted to the project area. For this project, the village authority has allocated two hectares of land, he added.

“We have decided to construct 80 such fields and once completed, each field will be allotted per household. The allotment will be permanent and the ownership cannot be transferred,” said Ramnganing.

It may be mentioned that Marangphung village is 61 km away from Ukhrul district headquarter with a population of 298 people and 77 houses as per 2011 census. It is just about 1 km from National Highway-202 and the village is famous for its salt springs.