A rare blessing turned into a matter of protest. To understand the present imbroglio, one needs to go back a little further on how the whole issue, which could have been avoided, was allowed to turned into a full-fledged mass protest. 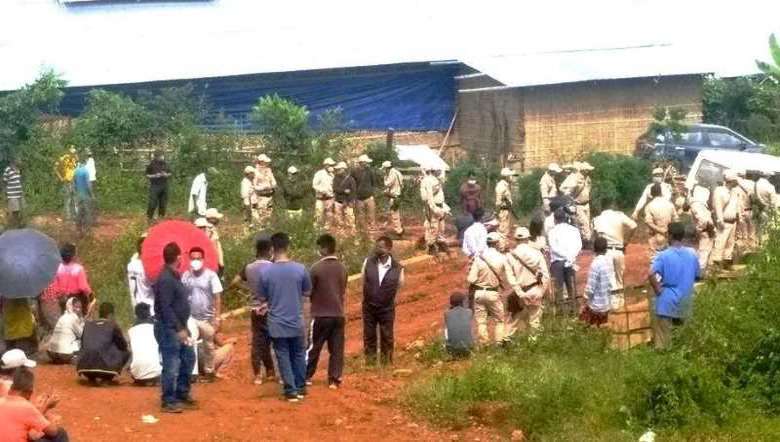 Manipur, a small state in North East India has been the mitochondria of games and sports in the country, which has to its name among many others, an overall Champion in the National Games in the year 1999. That Manipur today has many shining stars representing the country in different disciplines of sports is a testimony of the sporting talent the state is endowed with. It is therefore no surprise when Manipur was chosen as the preferred state for the location of  National Sports University. The foundation stone of the varsity, which has the distinction of being the first sports university in Asia, was inaugurated in 2018 by the PM Narendra Modi.The rare blessing however turned into an issue of protests, disputes, bandhs, and a near possible communal war in Manipur. To understand the present imbroglio, one needs to go back a little further as to how the whole issue, which could have been easily avoided, was allowed to metamorphosed into a full-fledged mass protest.

National Sports University was embroiled with controversy right from the word Go. The allocation of the site comprises Koutruk Dag No 1 Senjam Khonou and Senjam Cherang. But the majority of allocated land reportedly is in Koutruk Dag no 1. The core of the issue lies in the claim that the whole of Koutruk Dag no 1 comprises of Haraothel (L Tangnuam) land, which is in Saitu Gamphazol, Kangpokpi District, as per the Chief of Haraothel village, who had filed a PIL in this regard in the Imphal High Court. Since Manipur has distinctive Hill and valley districts, where Manipur Land and Revenue acts do not apply to the Hill areas, the allocation of Haraothel (L Tangnuam) land for the National Sports University merited the prior consent of the villagers concerned. The bypassing of the Hill areas committee and the absence of any form of consultation with the villagers was then viewed as an effort to grab tribal lands by the villagers. To make matters worse, though NSU comprises largely land belonging to Haraothel village, it was named NSU Koutruk much to the displeasure of the tribal villagers of Haraothel.

The Senjam Khunou and Senjam Cherang Development Council had maintained their stance that the allocated land belongs to the villagers of Koutruk, Senjam Khonou, and Senjam Cherang and does not include any tribal land. It is worth mentioning that both the parties; Senjam Khonou and Senjam Cherang Joint Development Organisation (SKSCJDO) and Haraothel (L Tangnuam) Village authorities have filed a PIL at the Imphal High court respectively on the issue. The Kuki Students’ Organization, Sadar Hills had also filed a petition to the National Commission for Scheduled Tribe. Interestingly, the NCST query on the matter remains unresponded by the State Government to date. 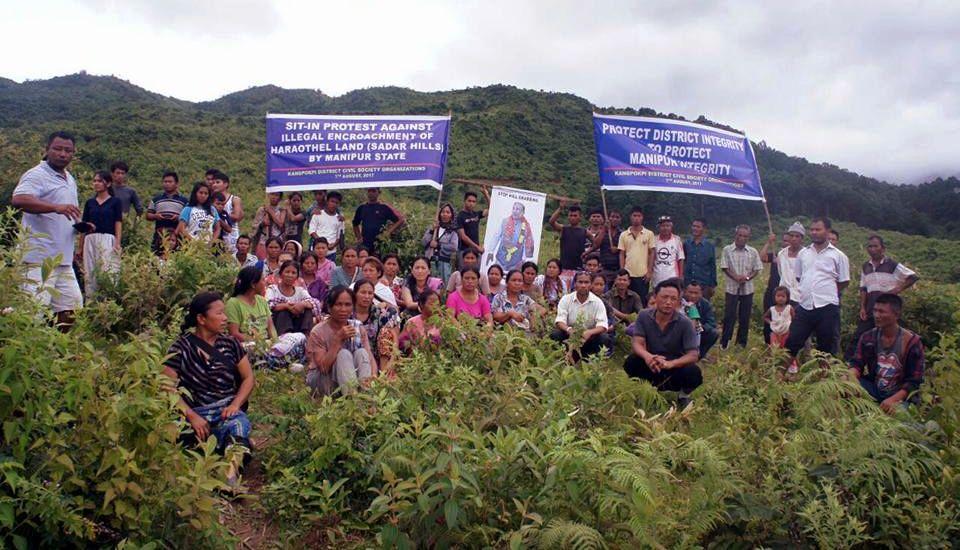 On the 9thof June 2020 the Chief Minister, during his visit to the varsity site had reportedly refused to meet the chief of Haraothel village and other stakeholders, even as construction works were in full swing. The cold treatment and non-enthusiastic approach to the issue by the State Government enraged the Haraothel villagers, as a result of which an economic blockade was announced by the Kuki Students Organisation (Sadar Hills/Kangpokpi) and Kuki Inpi Kangpokpi. The bandh was lifted only after a Cabinet Minister representing the State Government promised them of resolution. On the other hand, the SKSCJDO in their response to the bandh called by the KSO and Kuki Inpi had said, "any issue with regards to National sports university should only be discussed with us."

The present imbroglio had its genesis from a demarcation work effected as per the Imphal West DC order Dated 28/9/2020 and the Imphal West Superintendent of Police order dated 2nd October 2020 to demarcate National Sports University from 3rd to 5th October 2020. The more than 137 acres of land of Haraothel Village of Kangpokpi District (Hill) was demarcated forcefully to Imphal west- a valley District, even as the public vehemently protested the move for 3 consecutive days. The ensuing protest resulted in the firing of tear gas and lathi-charge by the Imphal West Police which had caused injuries to 10 innocent tribal villagers and a few police personnel. Taking serious note of the forceful demarcation of lands belonging to Haraothel village, the Kuki Inpi Kangpokpi - the apex boy of the Kukis in Kangpokpi district, and Kuki Students Organisation, Kangpokpi announced an economic blockade from 5th October until the Government re-demarcate the tribal land and accord due acknowledgment to Haraothel villagers. The bandh was endorsed by various Tribal based organisations including the All Tribal Students Union Manipur (ATSUM).

The Government representatives which included the State's Sports Minister, Environment Minister and an Advisor to the CM and the representatives of the Kuki CSOs met on 7th October and after much deliberations, the following resolutions were adopted;

2. The land donated by the chief of Haraothel, Kangpokpi District for the National Sports University has been acknowledged.

3. Apprehensions of the villages residing on the other side of the NSU campus will be re-demarcated from the Haraothel side of the land. 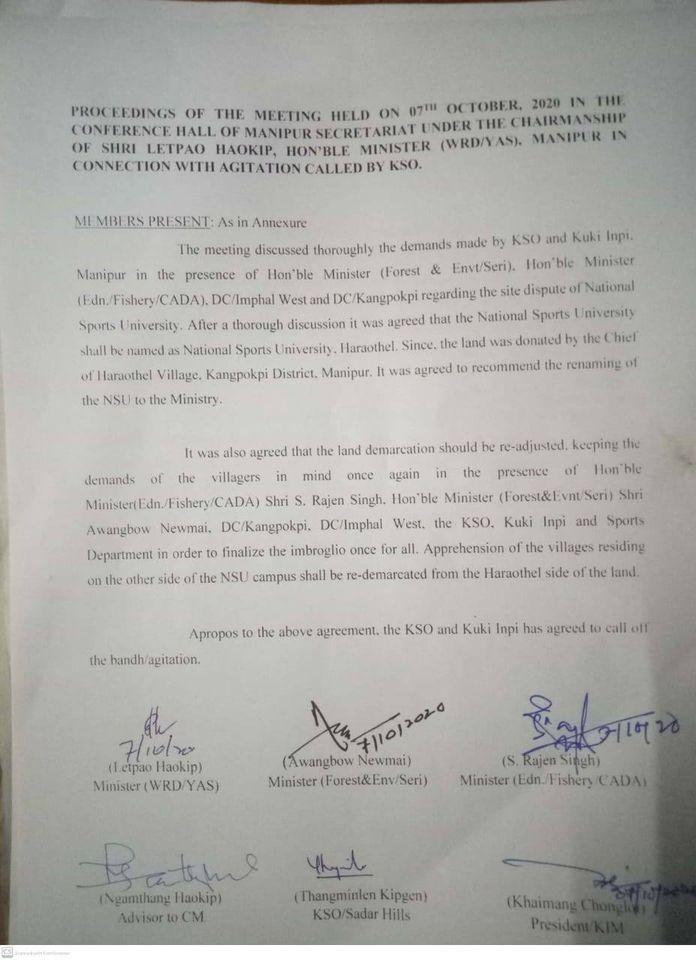 In light of the agreement, the Kuki Inpi Kangpokpi and Kuki Students Organisation, Sadar Hills lifted the bandh earlier called. However, within 24 hours of the agreement being signed, hundreds of people, belonging to Senjam Cherang, Senjam Khonou, Koutruk, and neighbouring villagers allegedly attacked Leimakhong village and adjoining villages, wherein the mob removed all signboards which had Kangpokpi District written on it and didn’t spare even a Church- a Pentecostal Church Signboard. Fortunately, the attacking mob armed with iron rods, machetes, and knives were dispersed by the Kangpokpi police before they could inflict serious damages. The District magistrate thereafter ordered section 144 crpc in and around Haraothel village.

Possibly, to appease those against the MOU, a Press release dated 9th October in the name of Minister, Forest and Environment, GOM which claimed to represent the Group of ministers that inked an MOU with Kuki groups, back-tracked on the agreements made. The press release made a shocking clarification about the Government of Manipur stance stating that the Government will go ahead with the proposed site ‘’submitted to the centre in earlier instances’’. Understandably, the PR by the Forest and Environment Minister that indirectly denounced the MOU with Kuki CSOs had enraged the Villagers of Haraothel and adjoining villages. ‘The Government is playing not just with our lands but our sentiments too. What is the point of having an MOU if its contents are to be disregarded within 48 hours? We want the Government to clarify their stance on the matter,’ said Pu H Vaiphei, resident of L Tangnuam(Haraothel).

The issue of National Sports University Haraothel has been used by many hate-mongering individuals and organizations to spread fake and hate messages that could affect the peaceful co-existence of the communities in the state. The Government could have avoided all these in the first place by involving concerned stakeholders. Nevertheless, the should haves and could haves will not resolve the current impending issue though they could serve as a useful lesson for future initiatives.

The Manipur Government has had negotiations and agreements with both representatives of the Haraothel Village as well as Senjam Khunou and Senjam Cherang in separate incidents. The agreements have evidently failed to resolve the issue as no effort has been taken so far to bring all the stakeholders in one table. Either the State Government re-demarcate all of Haraothel land (Kangpokpi District)  from the project and redesigned the NSU in Imphal West District wholly or they allocate the NSU in Haraothel land and re-demarcate all of Senjam Cherang and Senjam Khunou land ( Imphal west). But, if the Government is to go ahead with its present allocated land, which comprises Haraothel and Senjam Khunou & Senjam Cherang, all stakeholders should be taken on board so that the National Sports University is materialized devoid of foul play by any players concerned.