Manipur is seeing a rise of Covid positive cases and the positivity rates is also slowly inching up, as also the mortality rate. It must be ensured that the by-elections must not be the catalyst for further increase. 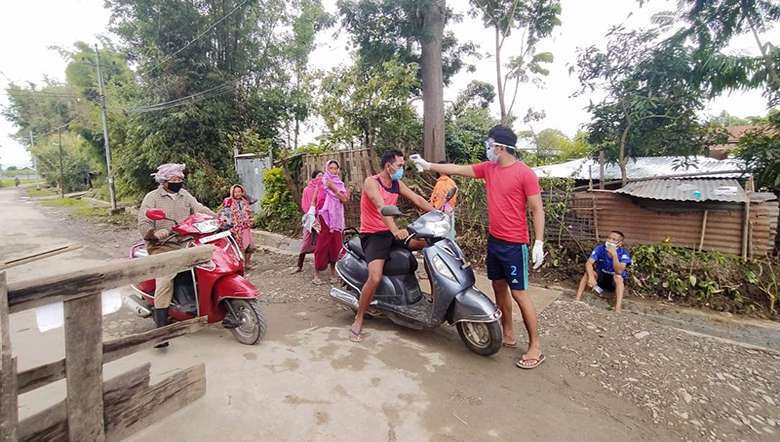 The process for conduct of by-elections in five Assembly constituencies of Manipur on November 7 is on. With this, canvassing has started and it is a bitter fight with violence flaring up in one or two constituencies. Election leads to crowd and therefore the chances of transmission of Covid-19 increased sharply. In view of the pandemic, the Election Commission of India had issued broad guidelines in August and it was expected that this will be followed to ensure that transmission of the disease is kept to the minimum. But, what was expected and what is the reality is poles apart.

Under the laws of the land, a constituency cannot be vacant for more than six months and thus all the vacancies will have to be filled up and these five segments are those which has attained finality in that there is no pending court cases. For the remaining, there are court cases but it is expected that the cases will reach finality before the passage of six months. The election laws have precedence over the ongoing pandemic. Many civil societies voiced their objections when elections were announced but now no voices were raised, perhaps with the feeling that the election Juggernaut will roll despite objections. These vacancies have been caused due to political machinations and manipulations and not due to any principle reeking of political corruptions. Be that it may be, the public of these ACs have the taste of the democratic tamasha or festival of democracy before the five years is over since the last elections.

Besides the normal safety precautions like use of mask, maintaining physical distancing, etc for door to door campaigning only five, including the candidate, excluding security personnel is allowed. Vehicles on road shows must be broken every five vehicles excluding security vehicles, and the DEOs must identify dedicated grounds with proper markings for physical distancing for public gathering with proper entry and exit points; and it must be ensured that the number should not exceed the limit laid down by the State Disaster Management Authority, which in Manipur from 15th onwards will be limited to 200 in closed space and for open spaces depending on the size of the open space by fulfilling the physical distancing norms.

There is nothing wrong in conducting by-elections and it should be if a seat falls vacant so that the AC is represented. The only hitch now is the Covid-19 pandemic which is spreading unchecked with daily confirmed cases of more than 200. There is a serious cause of worry that if proper SoP is not followed, these ACs may become the hotspot of transmission, and such worries are not misplaced. This worry is compounded by the visuals one sees in the TV which indicate lax following of the SoP. Many of the followers of the prospective candidates fail to wear mask or if worn does not do it properly; either leaving the nose and even the mouth uncovered or allowing the mask to hang it on the chin. Its protective value in the last case is zero, while the protection is less by about 70% when the nose is kept free. The candidates must ensure that he and his followers uses mask properly and while canvassing as enlightened citizens must covey the need for following the SoP. And the candidates and his followers must learn to speak through the mask without taking it off!

All elections in Manipur are a series of feast, big and small. In eating and drinking, the nose and the mouth are uncovered and the chances of transmission become much higher. Therefore there is a need to reduce wining and dining as the situation is abnormal. Further, there is a need to reduce crowd and to maintain the prescribed distance, which it is not in almost all the cases. SARS-CoV-2 does not distinguish any and the moment an opportunity comes, it will infect. And the prognosis on those who are aged and infirm is poor. Most will survive but the long term effect is still unknown and may be debilitating.

DEO of Thoubal had identified specific areas where public meetings of the candidates can be held but similar orders in the other districts is yet to be seen; though it may have been issued as per the ECI guidelines. It would in the best interest such monkey runs are identified and meetings held so that these can be better managed with proper markings and with full bandobast keeping a strict eye on the violations of the SoP. Civil society organisations which seek better governance must come out in the front and ensure that there are debates between the candidates as to their aims and objects and such debates must be made known to all the voters in the constituency through various media, including social media. This will enable them to assess the candidates, though many may be bought as done in the past. But it will provide an opportunity to compare and judge them on their competency.

The district police have been doing commendable work in conducting raids in specific locations and seizing materials for producing liquor besides seizing of licensed arms. The only request from the public this author interacted with is that it should not be specific and all areas must be policed without bias so that such materials are not available to any candidate for misuse during the run-up to the election. Who wins or who loses is immaterial as the choice is limited and the expectation is low among the electorates as the term of the elected candidate is limited and they also believe that the spending by the candidates will also be lesser as compared to the last general elections. However, the fight will be bitter as the stakes are high.

Manipur is seeing a rise of Covid positive cases and the positivity rates is also slowly inching up, as also the mortality rate. It must be ensured that the by-elections must not be the catalyst for further increase. And the responsibility falls on the CEO, DEOs and ROs besides the law enforcing agencies and the CSOs to ensure that this does not happen which can only be attained by following the laid down SoP. There will be however, always a doubt on whether the state agencies will be even-handed as in the past they have a tendency to favour the establishment; though not all as some are really committed to ensure equidistance and perform with sincerity.

The local clubs have a huge role to play at this critical juncture and they should not be swayed by politics and lucre and ensure that the people are protected from the dreaded disease, which can only be through following the SoP and they must ensure that none violate it. If the local clubs does it with commitment, there is a good chance that the candidates will think twice of violating it. Anybody seen violating it must be reported to the DEO along with evidences like photos and video clips. Such proactive initiative will make the candidates think twice before further violation.

It would be a good idea to stop canvassing at night as it can cause violation of the SoP and may also lead to violence, especially if a candidate goes around to other localities some of which were inimical to him or his workers. Banning of canvassing in the night may be a good proposition as during daytime anybody can see who violates the SoP and can also reduce altercations. It is hoped that the candidates also acts responsibly to ensure that the transmission of the disease is restricted in his AC which he should do with all his might if he really feels for the people. Candidates who acted responsibly may be chosen, whichever party he belongs to.