The Koirengei land may not be that important in terms of heritage value compared with Kangla but it has important historical value besides being a prime land. 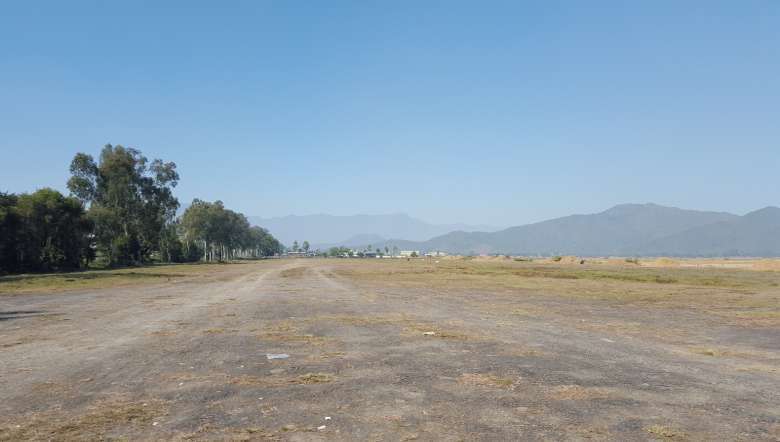 Ever since his childhood days, the Koirengei airfield must have been an eyesore for the Chief Minister N Biren Singh. The old airfield is opposite to his locality in Luwangsangbam. So, since Day One he has been lobbying hard for transfer of the Defence Ministry land to be reverted back to the state. This airfield was constructed during the Second World War by the Allied forces to check the Japanese advance. There was no airport in Manipur when the Japanese bombed Imphal town on Sunday, the 10th May, 1942. Koirengei Airfield was constructed during 1942-43 with the help of American Engineers. The other two main all weathers airfields constructed in Manipur during World War II were the Tulihal and Pallel airfields. Three other fair weathers airfields were also made during this period at Thoubal, Sapam and Kangla Siphai.

The runway for Koirengei airfield is 4900 ft. long and 138 ft. wide. The total area acquired for airfield was 74.24 acres. Out of this, 56.36 acres was state land while the remaining 17.82 acres were acquired from 16 private land owners. Compensation amounts for the land was paid to the State Government and the individual owners by the then Army Department of India. After independence, Koirengei Airfield was used as a civil airport up to the early part of 1959. After development of Tulihal Airport as a full-fledged civil airport, Koirengei airfield remain unused. Later on, the Manipur Public School was established in the vicinity of the old airfield. Successive state governments have been urging the centre to initiates steps to vacate the unused airfield located on the roadside of NH 2. The old airfield, once used by the central authority, is currently occupied by a unit of Territorial Army.

Manipur Chief Minister N Biren Singh have also been urging Prime Minister Narendra Modi and Union Home Minister Amit Shah to take up necessary steps to vacate the airfield and hand over it to the state government. Manipur is not alone in such cases. Various states in the country have lands in possession of the Defence ministry. But, land transfer from defence ministry to the respective state governments is always a cumbersome process. The Defence Ministry or the Government of India always puts up a stiff resistance to transfer the land without appropriate compensation either in kind or cash. The basis for calculation of land value to be transferred from the Defence Ministry to other agencies is based on the average cost of land sold near the surrounding areas of that particular land during the last 5(five) years. The Defence Ministry usually quotes an exorbitant price for the land. This assertion is always powered by the defence establishment as its main consideration is acquisition of land at vantage points in various parts of the country which is always driven by strategic concerns.

Not only the old airfield at Koirengei is prime land in the vicinity of Imphal but it is associated with the Second World War besides being surrounded by civilian areas. The Chief Minister had time and again inspected the condition of the old airfield. In one such visit, he had said that people have been demanding since quite a long time to shift the camp currently there at the airfield. Now, he seems to have succeeded in convincing the Defence Minister and also the defence establishment to transfer the Koirengei land in lieu of land near the Leimakhong cantonment area. Some may argue that it is not right to sacrifice 100 acres in Keingam near Leimakhong cantonment in place of the defence land in Koirengei which is only 66.91 acres. But, it is a sacrifice we have to make to clear out defence land from civilian areas in the Greater Imphal. Even though, the Koirengei land is not that important in terms of heritage value with that of Kangla it has still important historical value besides being a prime land. An alternate Kangla was once situated in the general area, according to our Puyas.