MLA Imo distributed a sum of Rs 15,000 as loan to beneficiaries to begin their construction work. 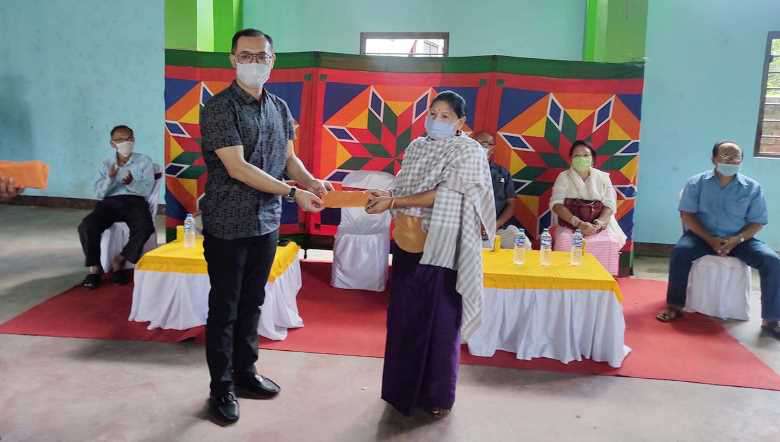 Assuring to cover all beneficiaries of Prime Minister Awaz Yojana (PMAY)-Housing for All of Sagolband AC, MLA of the constituency, RK Imo distributed a sum of Rs 15,000 as loan to beneficiaries to begin their construction work.

Speaking at the function held on Sunday at Waheng Leikai, Imo said that many people of Sagolband AC had applied for PMAY but due to non-fulfilment of required criteria, they were unable to receive benefits of the scheme till date.

As per criteria, money will be sanctioned in three phases.

For the first phase, money is sanction only after completion of foundation work of the construction work. But due to lack of financial problem, many beneficiaries are unable to begin their construction and this has become a stumbling block in receiving the money, he said adding that the loan amount of Rs 15,000 was provided to ease some financial constraints and get the grant of Rs 1.5 lacs.

He further informed that around 130 people from ward number 8 of Sagolband AC have applied for the scheme.
“Out of this, 60 people were selected to provide the loan on Sunday as documents of these groups have been completely submitted and accepted by Imphal Municipal Council. The rest will also be given the loan once the required process is completed, he added.

While appealing to the loan receivers to use the money judiciously, he pointed out that some people did not construct their house even after receiving the grant of the scheme.

“Such kind of irresponsibility has become one of the major hindrances in receiving the grant. As such, beneficiaries should not utilised the sanctioned money in wrong way,” he added.