NPF-PAM said during the course of interactions with various civil societies, it was reconfirmed that every Naga wanted an early solution. 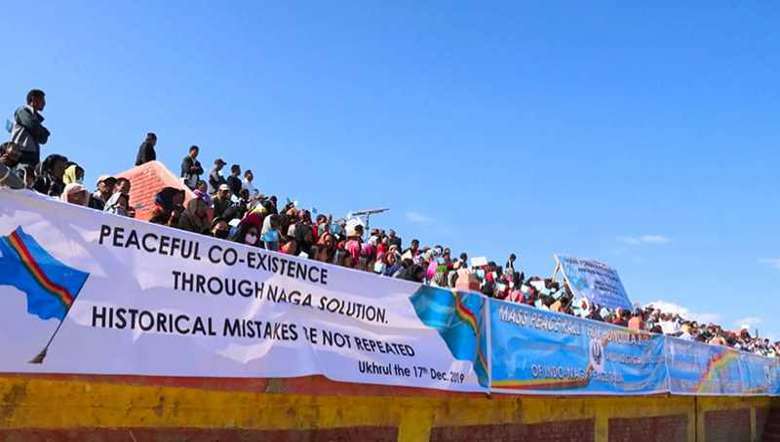 The Political Affairs Mission (PAM) of the Naga People’s Front (NPF) said on Sunday that both the NSCN (I-M) and the seven NNPGs have agreed in principle to meet and discuss across the table, as proposed by NPF-PAM in separate meetings with both the groups.

According to a press statement issued to the media on Sunday, NPF-PAM said, “During the course of interactions with various civil societies, it was reconfirmed that every Naga wanted an early solution while also noting that the past agreements and accords had taught us enough lessons on how ample dissensions had been brought into our society instead of uniting our people”. It added, “After having a series of consultation meetings with various civil societies, NGOs and the two Naga negotiating groups as stated, NPF-PAM could arrive at a conclusion that all the Nagas are in unison on the following observation: (1) An early solution which is acceptable, honourable and inclusive; (2) One Solution, One Accord; (3) All the Naga negotiating groups should come together and discuss across the table to make a reality of One Solution and One Accord”.

NPF-PAM then claimed it has been relentlessly working to bring every Naga nationalist group on board so that no one is left out in the proposed accord. It also said the aspiration for an honourable, acceptable and inclusive solution has been the guiding spirit of NPF-PAM in carrying out its mission thus far. “Likewise, it would continue to pursue reconciliation amongst the Naga nationalist groups in the true sense of the term which is a necessity if we are to survive as one people”.

According to the press note, the recent trip of NPF-PAM to Delhi has been quite encouraging as “we have been briefed by the representatives of the Government of India that the political dialogue has been put on track although there was some hitch for some time”. It added, “The Collective Leadership of the NSCN (IM) has also conveyed that they would definitely keep their words by way of participating in the effort of the NPF-PAM to bring the NSCN(IM) and the 7 NNPGs to sit across the table”.

NPF-PAM then said it will figure out the date and venue very soon in consultation with both NSCN (IM) and the NNPGs. “Towards this endeavour, we ardently appeal to every believer, Naga individual and organisations to uphold us in your prayer and extend your utmost cooperation so as to make this particular event a stepping stone for Naga unity and reconciliation”,  NPF-PAM added.

It can be mentioned here that after the withdrawal of the Naga People’s Front (NPF) from the Joint Legislators Forum (JLF) on Naga Political Issue of the Nagaland Legislative Assembly, the party had constituted the present day Political Affairs Mission (PAM). “This was done with the aim of further strengthening the ongoing talks between the Naga nationalist groups and the Government of India while continuing to play the role of an active facilitator on the Naga political issue,” NPF-PAM said.

NPF-PAM claimed it had a series of consultative meetings with the NSCN (IM), 7 NNPGs WC, various Naga civil societies and also with authorities representing the Government of India who are directly involved with the Naga negotiators.

It then said the objective is to bring the NSCN (IM) and the NNPGs to a common understanding as both the groups are presently engaged in negotiation with the Government of India for a political solution. NPF-PAM also said it will also reach out to all the other groups who are yet to join the peace process once tangible progress is made in its endeavour to bring the NSCN(IM) and the NNPGs to a certain level of understanding.