Okendro appealed to the people of the state to make efforts towards achieving a peaceful and developed society. 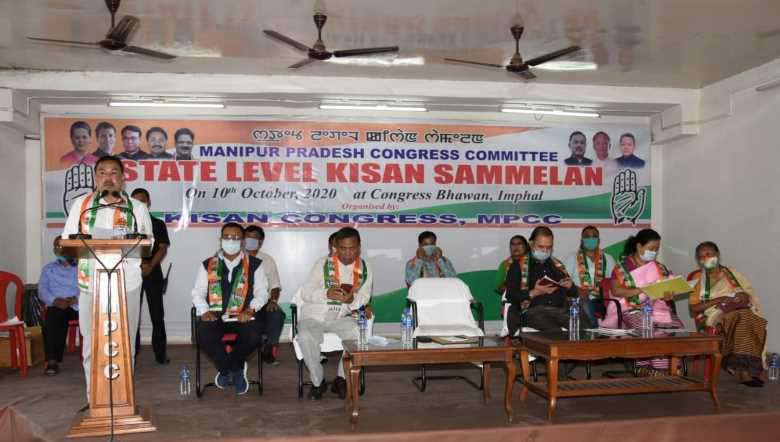 People are against the dictatorial form of governance of the BJP government and this will be visible in the outcome of the upcoming by-election of Manipur, said Manipur Pradesh Congress Committee president Moirangthem Okendro.

The BJP government should be made to realise that its dictatorial governance is not practiced elsewhere in other democratic and secular countries, he said.

Okendro was speaking as the chief guest at the state level Kisan Sammelan held at Congress Bhavan in Imphal on Saturday.

While contending that people do not have liberty to do and say what they want under the present government as the BJP government is always ready to detain or arrest any person who speaks against it, he said that the BJP government will continue its dictatorial governance if people fail to react and oppose it.

Commenting on the recent Farmers’ Acts, passed in the parliament, Okendro charged that the BJP did not bother to consult all stakeholders before passing the acts.

“People in the country will continue to suffer if the BJP continues its dictatorial rule,” he stated.

He ppealed to the people of the state to make efforts towards achieving a peaceful and developed society.

Chairman of Kishan Congress, Laitonjam Thoiba said that the minimum support price of the agricultural products will be controlled by the big companies if they step in in the agricultural sector.

“In case that happens, the wage and price of agricultural products will decrease and it will certainly affect the poor farmers. The farmers’ acts will only benefit the corporates and middle class groups,” said Thoiba.

Other members of Manipur Pradesh Congress Committee and representatives of different Kishan blocks were also present in the state level Kisan Sammelan.