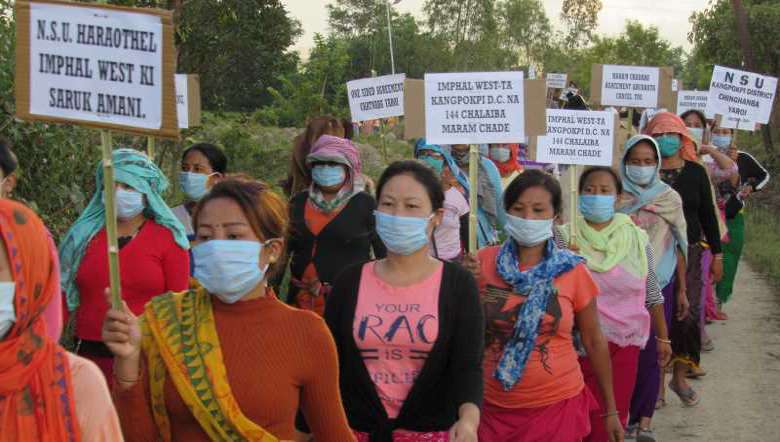 Locals of Imphal West district living near Haraothel on Friday enforced road blockade along the Sekmai bazaar stretch of the Imphal-Dimapur National Highway-2 in protest against the agreement that states the site of National Sports University (NSU), Haraothel as under the jurisdiction of Kangpokpi district.

During the protest, a car was partially destroyed by protesters after it tried to violate the roadblock.

Protesters from Senjam Chirang, Semjam Khunou, Koutruk and others who inhabit Imphal West district came out on the National Highway-2 and blocked the road at Sekmai bazaar. No commuters were allowed to pass through the highway even though essential services, including media were exempted from the purview of the roadblock.

Speaking to the media on the sidelines of the protest held at Sekmai bazaar, secretary of Kounu Leima Chanura Lup, Senjam Chirang, Heikham Amrabati said that Haraothel was donated by three villages of Imphal West district with the motive that development will be brought in the state with the construction of NSU.

Amrabati recounted that after taking the consent of the surrounding village of Imphal West district located near Haraothel village, the foundation for the construction of NSU was laid with the consent of Prime Minister Narendra Modi.

Amrabati demanded that the government should bring an amicable solution regarding the matter instead of playing politics as the land was donated for the welfare of the people. She said Haraothel should be included in Imphal West district.

“If the government failed to fulfil the demand, intensified agitations, including indefinite highway blockade will be launched and Sekmai MLA Heikham Dingo will be boycotted indefinitely,” she cautioned.

The protesters told the media that “as the protesters were blocking the national highway, we told them to stop and when they were about to ask where they are going, the car tried to flee from the site. When the irate protesters broke the windshield of the car and intercepted, four occupants including two women and two men were found in a drunk condition.”

Two bottles of Indian Made Foreign Liquors were recovered and all the occupants were found drunk, the protesters claimed.

Vehicles on the national highway were seen lining up as the highway was blocked at Sekmai Bazar.

When the meeting was going on, some miscreants pelted stones towards the meeting venue and attendees fled from the spot. Later at about 8 pm of Thursday, some other miscreants in large numbers came and started destroying houses in the surrounding area. The miscreants have destroyed at least 10 houses and during the incident three people were brutally injured, he stated.

He also questioned who is going to take responsibility of the injured and the loss of properties. Later, a sit-in-protest was staged by locals of Senjam Chirang and the protesters took out a rally towards the proposed NSU site.

Protesters held placards that read “Maram Chadaba Agreement Khudakta Cancel Tou” ( Unreasonable agreement must be cancelled immediately); “NSU must not be included in Kangpokpi district”; “NSU Haraothel is a part of Imphal West district”; “One-sided agreement must not be implemented”; “It is unreasonable to put 144 CrPc in Imphal West district by Kangpokpi DC” among others.

The rally was started from Senjam Chirang and after staging a sit-in at NSU construction site for a while, the rally culminated at the starting point.