The All Manipur Students Union said the office will remain closed till an understanding between the union and the education department regarding the monthly fee structure of schools is arrived at. 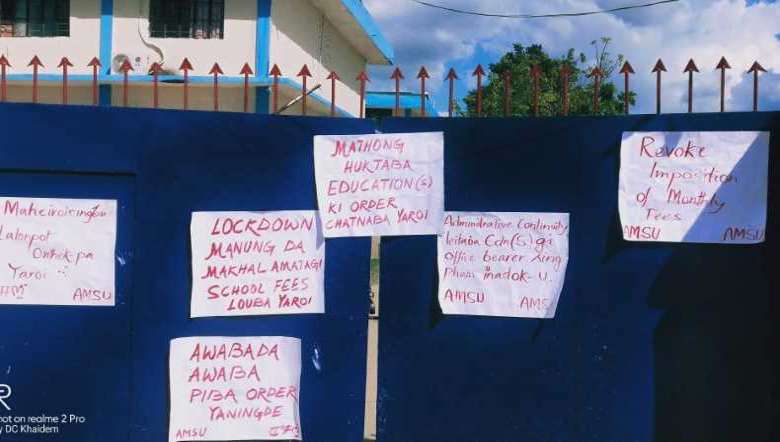 Reinstating its demand to the education department to revoke its October 5 order regarding school fees collection, volunteers of the All Manipur Students Union (AMSU) locked the gate of the directorate of education (S) at Lamphelpat in Imphal on Friday.

The AMSU said the office will remain closed till an understanding between the union and the education department regarding the monthly fee structure of schools is arrived at.

The students union has been demanding the state government to revoke the education(s) department order that directed private schools to collect 30 per cent monthly payable school fees from the parents of students for the period of closure of schools, i.e from April 2020.

As per the latest order, the education department instructed all private schools and aided schools to collect 30 per cent of the monthly payable fees from the students starting from April last. Besides this, it also directed to give 50 per cent monthly payable salary to teachers and staff of the schools.

Recently, AMSU demanded the state government to rescind the order before October 8 and warned of launching various forms of agitations if the demand is not fulfilled within the stipulated time.

Reacting to the order, the United Association of Recognised Private School Association Manipur on October 6 has also stated that directing the private schools to collect 30 per cent of monthly payable fees from parents of the students and to pay 50 per cent of the payable monthly salary to the staff/ teachers will be applicable for big schools in valleys but not in hill districts and periphery of valley.