Ukhrul: Tashar villagers repair, maintain road with own money for over three decades

Tashar villagers in Ukhrul district of Manipur seek the intervention of the government and appealed to authority concerned to address their grievances. 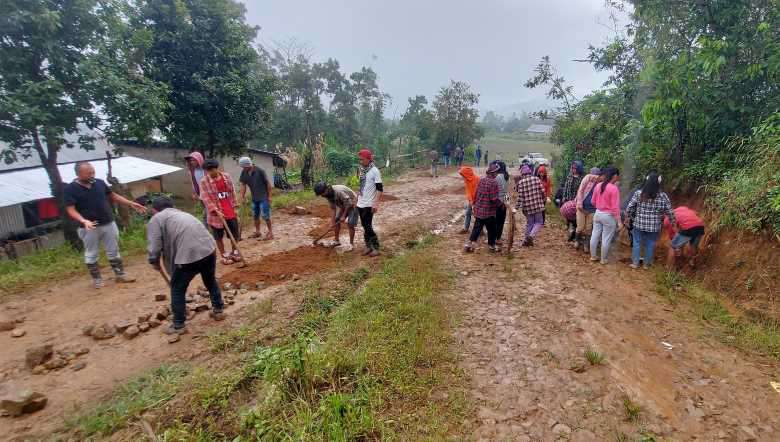 The villagers of Tashar and Tashar Chanhong of Ukhrul district in Manipur have been maintaining a road stretch of nine km long for the past 34 years with voluntary contribution among themselves. Suffering for decades due to poor road connectivity, they now seek the intervention of the government and have appealed to the authority concerned to address their grievances.

Located Southwest of Ukhrul district, Tashar and Tashar Chanhong is about 18 km from Ukhrul town. The road is the only lifeline connecting the two parts of Tashar or Tushar or Tushen as some call it, with the rest of the state.

The cutting of the road began in 1986. It, however, remained unattended by the authority concerned despite the deplorable condition, especially during the rainy months. In view of the difficulties faced by the villagers in using the road, the villagers of the two villages came together to repair the road. However, the road often get damaged during heavy rainfall every year.

In an interaction with the Imphal Free Press, headman of Tashar village, As Shinmi said that no improvement work of the road has been carried out by the authority concerned since the first hill cutting of the road. He said that the distance between Ramva (NH-202) to Tashar is just seven km and from Ramva to Tashar Chanhong is nine km. However, due to the deplorable conditions of the road, it takes almost an hour drive to cover the seven km distance in the rainy season, the village head added.

“The road has been neglected by the government. The villagers have no option but to repair the road themselves every year through community contribution lest they remain cut off from the rest of the state,” Shinmi said.

For the sick to receive medical care, they have to travel the deplorable stretch of road as the nearest healthcare centre for the two villages is located at Ramva.

The village headman further said that the shingling of the road was done by the villagers way back in 2003-04, and every year the villagers are doing the same routine work to keep the road in motorable condition. The villagers have been maintaining the road without any help and assistance from the state government, he said, appealing for government intervention to address their grievances.

“We appeal to the government to kindly look into our grievances. We earnestly want a motorable road so that vehicles can ply on the road throughout the season,” said the headman.

A 65-year-old village authority member of Tashar village since 1993, Somi Zimik also said that the people of the two villages have been repairing the road for decades and they continue to put the same effort into repairing the road till today as they are left with no choice.

The villagers from these two villages have been maintaining the road by laying boulders, filling up with earth and clearing the roadsides and drainage. Through voluntary contribution, the villagers managed to arrange heavy machines like roller to repair the road.