All Manipur Nupi Marup president Thingbaijam Sakhi said that dropping the lone woman minister from the ministerial post has hurt the sentiments of many women in the state. 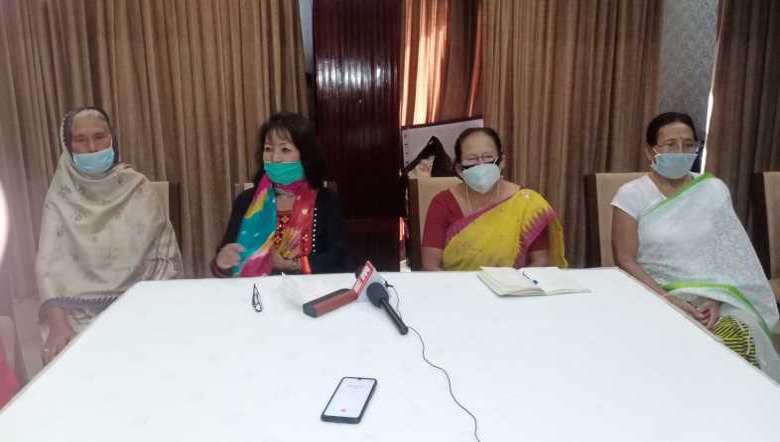 Condemning the removal of Nemcha Kipgen from the state cabinet, women bodies’ of different communities demanded the state government to provide reasons for her removal.

Speaking to the media at Hotel Classic on Friday, president of All Manipur Nupi Marup, Thingbaijam Sakhi said that dropping the lone woman minister from the ministerial post has hurt the sentiments of many women in the state.

Although the BJP government has been raising the slogan “Beti Bachao, Beti Padhao” to promote and empower women, she contended that it has failed to uphold the spirit of the slogan.

The women groups also questioned whether Nemcha is not capable enough to be a minister?

Despite the fast track courts set up in different districts, many women victims are longing for justice and culprits are yet to be given befitting punishment, she stated.

She further questioned the capability of other ministers that the lone women minister has to be removed from her ministerial post.

Suppressing women will not bring development in the state. Women should be uplifted and there should be more women representatives, Sakhi added.

President of All Manipur Muslim Women Organisation, Janu Begum said that she does not have any personal relation with Nemcha Kipgen but the fact that the lone woman minister was removed from the state cabinet has hurt the sentiments of many women.

Convener of All Manipur Tribal Women Union, Kim Gangte said that the womenfolk are not demanding reinstating of Nemcha as a minister but questioning why she was dropped from the cabinet.

“Many times, people in power abuse their political power especially against women when many countries are raising awareness to uplift women to bring development,” she contended.

While stating that discrimination against women is on the rise in the state because of their silence, she said that women should be included in policy making for their upliftment.

Kim further said that the women folk will draft a memorandum and submit it to all concerned authorities at national and international level for discrimination against women.

“Women in Manipur will no longer tolerate discrimination and mental harassment. We have our own rights. Though the government failed to listen to the voice of women, there are also a section of men who stood for women and their upliftment,” she added.