The villagers have sought the intervention of the department concerned to control the invasion and destruction of their crops. 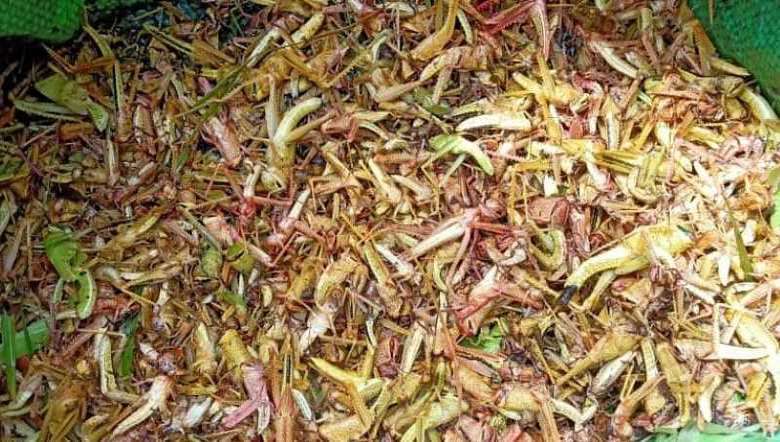 Khambi (Khengva) village in Kamjong district of Manipur that has adopted organic farming as the main source of livelihood of the people has been reeling under severe locust attack. In their fight against the locust attack in the fields which is damaging the crops, the villagers have been spending sleepless nights, handpicking the invading swarm of pests in their paddy fields in an effort to save the crops.

Located in west of Kamjong district, Khambi village which falls under Phungyar sub-division, has over 100 households. According to the 2011 census, Khambi has 112 households with the total of 642 people people.

Ninety per cent of the total population of this remote village, numbering barely a thousand, depends on agriculture as the main occupation for their livelihood.

Recently, the alarming locust attack in the fields has sparked off fear and worry among the villagers. They doubt they would reap the fruit of their labour this year.

Stone Hungyo, a villager, said 90 per cent of the fields in and around the village is under attack by swarm of locusts. He said that though the locust species is native to the place, the number has increased to such an extent that the attack is getting out of control.

“The villagers are spending the nights in their fields to catch the locust. It is easier for us to catch them in the night as they are clustered together and less active at night,” Stone Hungyo said, adding that a person can catch around 1000 locusts in a night.

During day time, the villagers release the chickens in their paddy field to feed on the pest that are active and almost impossible to catch them, said Hungyo.

"Nevertheless, our efforts to control the invasion seemed to be ineffective as the number of the locust continues to rise," he added.

In the wake of the grim situation, the villagers are restraining themselves from using any insecticides or pesticides for they have adopted organic farming under the organic mission initiative of the state government.

Frustrated villagers, however, lamented that they are becoming desperate to such an extent that using pesticide seemed to be the only way out.

According to Taoshim Awungshi, village secretary, the attack is carried out by around five to six varieties of locusts. However, he said that the locusts are not new species and commonly found in the areas.

“We are the ones to consume our products, so we are scared that there will be side effects on our health if we use pesticides or insecticides,” said Awungshi.

Awungshi said that the villagers had not experienced such an attack in the paddy fields, though the locusts were common to the area. At the initial stage, when the pest started invading the fields, some of the villagers even caught the locust and consumed it. However, now that the pests are in abundance and beyond control, they have stopped consuming it, he added.

Some of the villagers have even stopped visiting their fields now, they have lost hope since they do not know nor have any useful methods to control the locusts. In the past, the villagers could sell their vegetables and it was a source of income for many of them. But, now that the pest has even attacked the vegetables, the villagers are helpless, he said.

The villagers have sought the intervention of the department concerned to control the invasion and the destruction of their crops by the locusts.

It has been informed that the locusts are not matured yet but it has already inflicted extensive damage to the crops. But, the trail of destruction the pest could leave after they matured is the greatest fear the villagers are anticipating.

According to official data, Khambi is partially connected by Ukhrul-Phungyar state highway and Shangshak-Yairipok district road. The village is known for its reserved natural environment and rich biodiversity.