The BJP Heirok Mandal has resolved to support any decision taken up by Th Radheshyam for the welfare of the people of Heirok and the state. 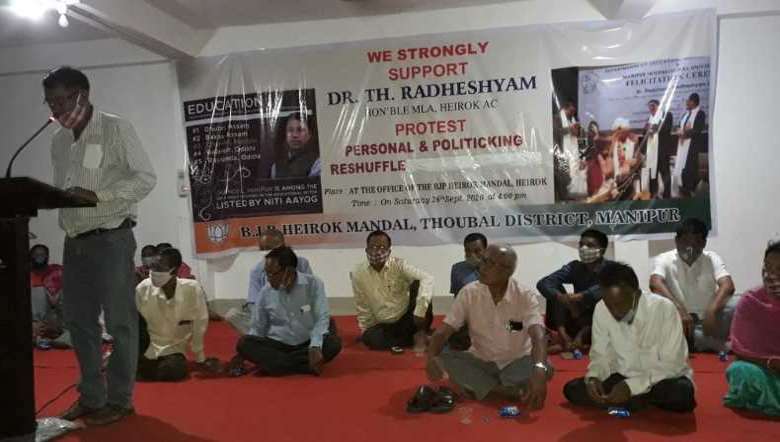 BJP Heirok Mandal and people of Heirok on Saturday protested against the recent minister reshuffle within the Manipur government in which Heirok MLA, Th Radhehsyam was dropped from cabinet berth.

During the protest meeting held at the Mandal office, the Mandal has also resolved to fully support any decision taken up by Th Radheshyam for the welfare of the people of Heirok and the state.

Speaking at the protest meeting, member, Heirok zilla parishad, T Nungshi said that the reshuffle was a personal decision of Chief Minister N Biren and expressed strong opposition over it.

“The reshuffle was carried out not to bring more stability to the government. Rather, it will result in getting rid of the political party BJP from the soil of Manipur,” he contended.

He said that the fate of 12 MLAs recently appointed as parliamentary secretaries is still uncertain with the High Court’s ruling. “BJP Heirok Mandal will never accept the ministry reshuffle which is seemingly been done in his personal interest by Biren,” he added.

Nungshi further alleged that the decision to drop Th Radheshyam, who has been shouldering major responsibility for Kakching and Thoubal districts, from the cabinet shows that Biren has disparity of rural-urban. Biren’s decision for the reshuffle is against his own flagship programmes like ‘Go to Village’ and ‘School Phagathansi Mission’, stated Nungshi.

He went on to charge that chief minister Biren had disregard the “Beti Bachao, Beti Padhao” campaign of India government led by prime minister, Narendra Modi in attempt to protect his own power.

“Radheshyam, as an education minister, had put in all efforts for proper implementation of the policy in the state. Besides, as a labour minister, Radheshyam also took up measures for utilising the skills of skilled labourers and students who returned from other states with the pandemic,” he said and questioned if CM Biren lacks value of education o is acting like someone who does not.

He further said that BJP Heirok Mandal take it as a short-sightedness of Biren to drop Radheshyam from minister considering the tireless efforts made by Radheshyam for improving the education system in the state.

Expressing apprehension whether CM Biren will destroy the BJP party in the state, Chourjit announced that the Mandal has resolved to extend full support in decision taken by Radheshyam for welfare of the people of Heirok and the state.