The Meidingus of Manipur have always been champions of Manipuri culture and continuity of core value systems even in the onslaught of cultural invasions from the West, and Meidingu Leishemba Sanajaoba is trying hard to live upto the tradition set by his ancestors. 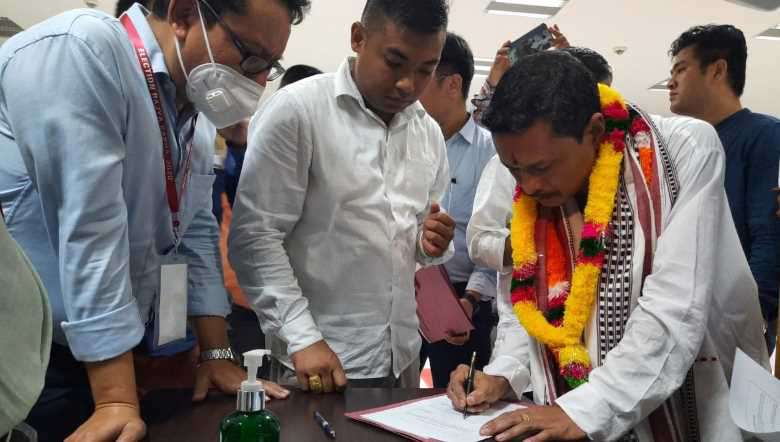 True to his words, the new Rajya Sabha MP Meidingu Leishemba Sanajaoba flagged two important issues regarding Manipuri language. We prefer to use the term ‘Meidingu’ instead of ‘Maharaja’ to stress the fact that there are enough words and terms in the vocabulary of Manipuri language to match any other ancient languages in the world and the country. Despite its richness, Manipuri language is also dynamic and has the strength to absorb foreign words into its fold and also adapt to change and modern realities. It is one of the oldest languages in Southeast Asia, which has its own script and written literature. It was on August 20, 1992 that the Manipuri language was included in the 8th Schedule of the Constitution. Despite being the lingua franca of the state, it is spoken in Manipuri populated areas in Bangladesh, Myanmar and other Northeastern states like Assam and Tripura. Also, there is no dearth of books in the form of manuscripts or Puyas written in old and archaic Manipuri by ancient scholars with subjects ranging from sources of historiography to indigenous knowledge systems, rituals and cultural practices, statecraft, geography and drainage system, genealogy, political allegory, principles of war and humanitarian traditions, and even studies in astrology and astronomy. Many of these Puyas seems to have been compiled in later centuries, yet the content is ancient and there is every possibility of the knowledge being passed down orally through the scholars.

Coming back to the issues raised by Meidingu Sanajaoba, the demand for declaring Manipuri as a classical Indian language and as an associate official language in the state of Assam is very important and timely for furthering the development of the language. Local linguists say, Manipuri language fulfils all the four criteria set by the Union Government for eligibility as a classical language. There are five classical languages namely, Tamil (2004), Sanskrit (2005), Kannada and Telegu (2008) Malayalam (2013) and Oriya (2014). The set criteria is that, the language in question should have high antiquity in its early texts and recorded history over a period of 1500-2000 years; existence of a body of ancient literature texts, which is considered a valuable heritage by generations of speakers; that the literary tradition be original and not borrowed from another speech community, and that the classical language and literature being, distinct from modern, there may also be a discontinuity between the classical language and its later forms or its offshoots.

Whatever be the opinion of our local linguists, historians, archaeologists, anthropologists and literary persons, their opinion needs to be complemented by non-local experts and authorities in their respective fields. So, there is a need for our experts to put their minds together so as to be able to present a scientific treatise to push the agenda for classification as a classical language. For example, some of the ancient texts has complementary volumes. Cheitharol Kumbaba is a chronicle of events starting from 33 AD when state formation began with Nongda Lairen Pakhangba as the Sovereign till the reign of Meidingu Bodhachandra. The work is further complemented by two other Puyas namely Ningthourol Lambuba and Ningthourol Kumbaba, according to scholars working in the field. The Meidingus of Manipur have always been champions of Manipuri culture and continuity of core value systems even in the onslaught of cultural invasions from the West, and Meidingu Leishemba Sanajaoba is trying hard to live up to the tradition set by his ancestors. May he succeed in his endeavours. Yet, he must be wary of the fanatics who are unwittingly trying to unwind the dynamic process of Manipuri language in a misconceived sense of revivalism.