BJP’s ‘Nari Shakti’ is only a ‘tokenism and gimmickry’, says enraged Kangpokpi women

Women supporters condemned the BJP government for removing Nemcha Kipgen from the Council of Ministers on Thursday. 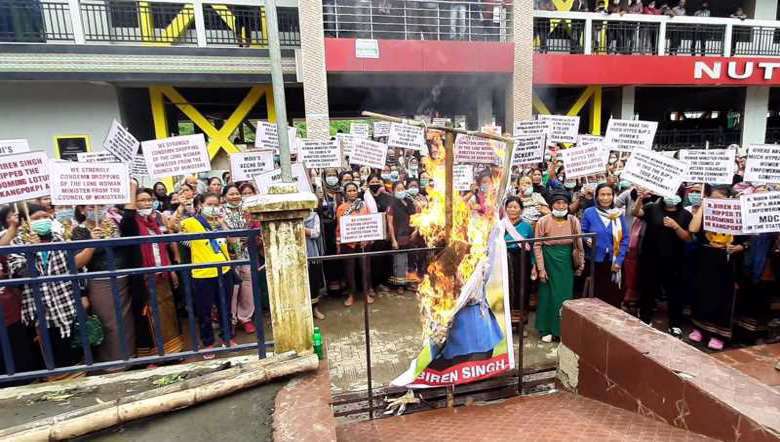 Hundreds of enraged women in Kangpokpi on Friday held demonstration and condemned the Biren Singh-led government over the removal of Kangpokpi constituentcy MLA Nemcha Kipgen along with five others from the Manipur Council of ministers  at the district headquarters on Friday.

The women supporters congregated  and burned the effigy of Biren, terming the removal of Kipgen, the lone woman member, from the state cabinet as "annihilating women empowerment and opportunity" in Manipur during a sit-in protest.

The protesting women also held placards which read, “We strongly condemn dropping of the lone woman minister from the council of ministers”, “N Biren Singh ripped the blooming lotus in Kangpokpi AC”, “Where have the much hyped BJP’s women’s empowerment gone?”, “Biren led BJP Govt. kills women’s reservation in Manipur, annihilates women opportunities”, “Social Welfare & Co-op. Dept. in the state is back to life because of Pi Nemcha Kipgen”, “No more woman minister in Manipur Legislative Assembly, is this the BJP’s true face of women empowerment?”, “BJP’s spirit of ‘Nari Shakti’ in Manipur is a mere tokenism and gimmickry”, etc.

Speaking to the media, Hethem Kipgen, secretary KWU Sadar Hills said that Modi and the BJP has always been a vocal proponent of women empowerment and an outspoken votary of giving women their due in the legislature but N. Biren Singh in Manipur has shown the true face of BJP’s women empowerment by dropping the lone woman minister from his council of ministers. The women of Kangpokpi AC are shocked and extremely discontented over the dropping of Kipgen, she said.

Hethem continued during the Ibobi Singh led Congress government, the lone woman Minister Mirabai was never dropped from the council of ministers and always hold the position without any dispute. But the BJP who has the tall promise of empowering women removed its lone woman minister from the state cabinet, she asdded.

"If the BJP is truly committed to 33 percent reservation in Parliament and state assemblies why its lone woman minister in Manipur was dropped from the Council of ministers instead of passing the Women Reservation Bill in the Lok Sabha? Where has the party’s commitment to ensure better representation of women in positions of power gone? Where the BJP’s dream of New India to enable women with opportunities to express their innate leadership qualities has gone?," she asked.

Slamming the BJP’s tall promise of empowering women, Hethem continued that despite the BJP in its manifesto for Lok Sabha Election 2019 stressing upon the spirit of 'Nari Shakti' (women empowerment) to achieve its goal of a developed India, the ‘Nari Shakti’ remains a mere ‘Tokenism and Gimmickry’ in the state of Manipur.

She continued that the BJP much hyped of championing the political empowerment of women in governance or within the party organization itself and also its commitment to 33% reservation in Parliament and state assemblies is a complete mockery.

Whether the cabinet reshuffle was a desire of the national leaders as a routine matter or being part of the party’s policy, they can let its lone woman minister continue her office if it truly is committed to women empowerment, she added and wonder when the BJP cannot empower its own woman minister how would it be possible to empower million of Indian women?

She further said that dropping Nemcha Kipgen from Council of Ministers despite of being the lone woman minister is not only subjugating the women community of the state but ‘underrating and undervaluing’ the women of her constituency which cannot be considered softly.

We want Chief Minister N. Biren Singh to rectify and restore the BJP’s commitment of empowering women by re-instating Nemcha Kipgen in her position, said Hethem Kipgen while adding that our further course of action will be solely decided by his decision from today.

She asserted that the Social Welfare and Cooperation department which was once similar to defunct department has been revive and bring back to life by the lone woman Minister with much efforts and struggles benefiting women, children, old age, differently able persons and many other deprive people in the state.

With regards to development in Kangpokpi district, the women president also said that many developmental works in various sector had been implemented in the district and many more are in the pipeline under her ministership while adding that being a woman she has the excellent management abilities, communication skills, ability to multitask, caring and understanding and she is also instrumental in prevailing peace and harmony among all communities.

She also recalled the immense contribution and vital role she played in the fight against the pandemic COVID-19 as a minister in-charge for COVID-19 in Kangpokpi and Senapati district to save and protect thousand lives from the dreaded virus with  commitment and determination.

What makes the BJP’s Biren Singh-led government drop her from the council of Ministers is a matter shocked to every women of the state said Hekim Hangshing while demanding to re-instate her in her position considering the women reservation policy apart from her commitment, capability and determination.

Thadou Student’s Association Sadar Hills also questioned the creditability of the new seat allotment after the cabinet reshuffle stating that as per the seat allotment there has to be at least four ministers from the hills district but now the BJP’s Biren Singh-led Government is surfacing like a communal Government.

KTC chairman Lunseh Kipgen and many other leaders also spoke on the sideline of the protest.