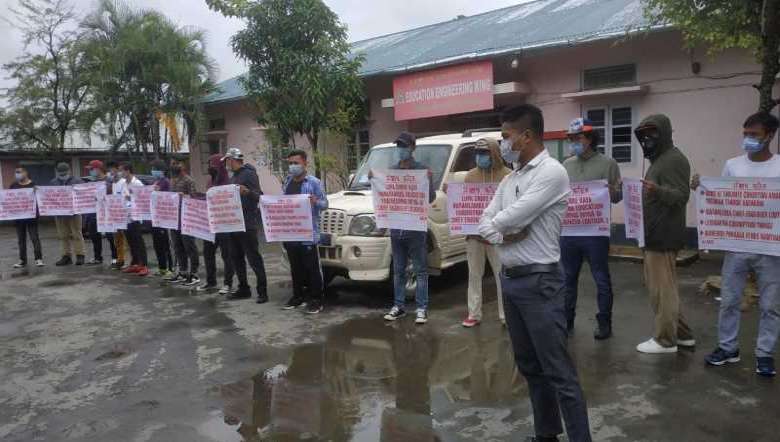 Decrying the non-release of arrested volunteers of Apunba Ireipakki Maheiroi Singpanglup (AIMS) despite repeated appeals, many members of AIMS thronged the office of engineering wing of the education department and staged protest on Monday. The protestors also imposed a public curfew in the premises of the said wing until their demand is fulfilled.

Speaking to the media on the sidelines of the agitation, vice president, AIMS, Saikhom Premchand said that their protest is in condemnation of the irresponsible act of authority concerned.

“It is an ongoing agitation in connection with irregularities found in engineering wing of the said department,” he said. He said the agitation will continue until the authority concerned punish the corrupted chief engineer of the department and release their arrested volunteers without any condition.

Premchand said that the public curfew has been imposed in the premises as the student body wants to cleanse the misappropriation and ugly affairs detected in the wing.

While urging all staff of the wing not to attend office until their demand is fulfilled by authority concerned, he warned that action will be taken against those who violate the curfew.

The student body also demanded to immediately stop construction work of DM University and Engineering College Heirok until the agitation is settled down.

Meanwhile, expressing support to the ongoing agitation of AIMS, Leihou Khunai Kanba Luptin (LKKL) also demanded unconditional release of the arrested volunteers of AIMS and to punish corrupted chief engineer of the said wing of the department.

LKKL, in a release pressurised the state government not to take lightly the recent scam of engineering wing of education department that was brought to light by AIMS.

Such instance exemplify existence of misappropriation and irregularities of the wing. The state government should punish the people involved in the case so as to avoid recurrence of such scam, it demanded.

Stating about the misappropriation, it alleged that large amount of money was diverted from the wing on the ground that architectural work for the construction of DM University and Engineering College Heirok was outsourced to a private firm.

On the contrary, it was done by staff and architect of the wing. Even the private firm BCS Architecture had also clarified that they take no responsibility in drawing the building of the said institutions, it said while adding that LKKL will support the agitation launched by AIMS till the demand is fulfilled.