The poster campaign is a part of the “Anaemia Free Manipur 2020” which was initiated by Heikrujam Joybee Devi, a prominent member of Bharat Vikas Parishad, Manipur. 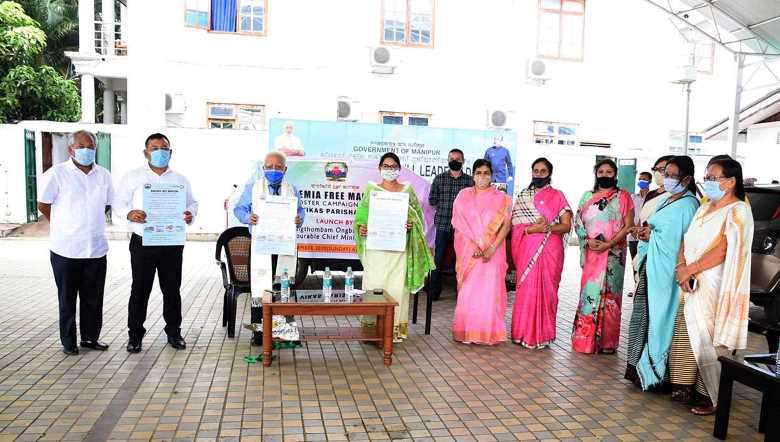 With an aim to raise an awareness about the deficiency of iron (anaemia) among the people of the State, Nongthombam Ongbi Hiyainu Devi, wife of Chief Minister Manipur N. Biren Singh, launched the “Anaemia Free Manipur Poster Campaign 2020” under Bharat Vikas Parishad, Manipur at CM secretariat on Sunday.

The poster campaign is a part of the “Anaemia Free Manipur 2020” which was initiated by Heikrujam Joybee Devi, a prominent member of Bharat Vikas Parishad, Manipur.

Speaking on the occasion, Director (IPR) Heisnam Balkrisna Singh said that there is a need for mass awareness campaign about the deficiency of iron (anaemia) among the public especially womenfolk of the state.

With such poster campaign, we could sensitize the people about anaemia and the ways to overcome the iron deficiency, he opined. He thanked Nongthombam Ongbi Hiyainu Devi for accepting the Parishad’s request for becoming the ‘Brand Ambassador’ of Anaemia Free Manipur 2020 campaign.

While delivering her address, Heikrujam Joybee Devi extensively talked about the high prevalence of anemia in women of reproductive age. She stated that almost 20 percent of women in the country are suffering from anaemia and the situation is very alarming.

The poster of the campaign includes the importance of iron to our body, signs of iron deficiency, iron-rich foods both vegetarian and non-vegetarian to be consumed by the public.