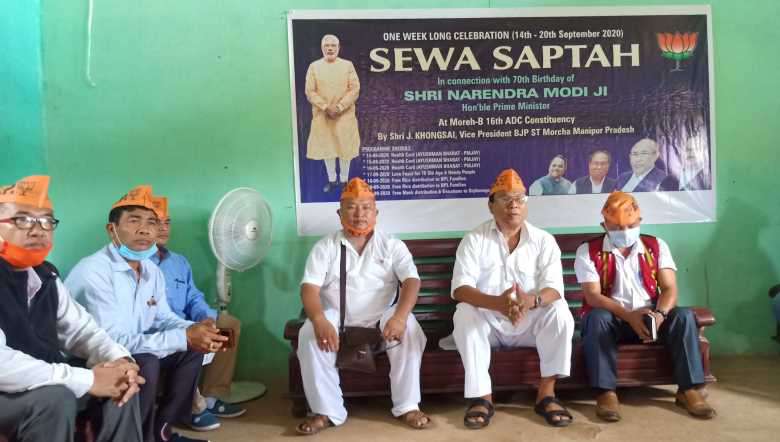 At Gamnom Veng community hall, the celebration was organised by the election committee of 16 B constituency and it was attended by vice-president of ST Morcha, BJP Manipur, J Khongsai and president of BJP Manipur Pradesh, S Tikendra was the chief guest of the function.

Tikendra said that the achievement and activities done by Narendra Modi is now known worldwide and his sacrificing spirit is honoured by one and all. During his leadership, he has taken up various programmes for the welfare of the weaker sections, widows, differently-abled persons and introduced student’s scheme, old aged pension scheme, and brought major economic development in the country, he added.

He continued that even today, Narendra Modi’s birthday is observed as Sewa Saptah which means service week. Service to the weaker section and mankind marks the celebration of his birthday.

As a part of the observation, PMJAY (Ayushman Bharat) cards were also handed out to BPL families.

Different CVO leaders, women organisations and various BJP workers also attended the function. As a part of the programme, meritorious students of Class X and Class XII of Moreh town were also felicitated.

The celebration of the 70th birth anniversary of Narendra Modi was also held at Chavang Phai Community hall, Moreh.

S Tikendra in his speech said that he is glad to attend the felicitation programme at Moreh organised by secretary of ST Morcha Manipur, Thangkhulun Haokip. The birth anniversary of Narendra Modi is organised nationwide for one week long and as a part of the celebration, the country is observing ‘Sewa Saptah’, he added.

The observation of Sewa Saptah was also held at 15 A constituency MDCC at Moreh town, organised by member ADC Chandel, Cecilia Haokip. Cecilia Haokip in her speech highlighted the love and affection for people of the country by Narendra Modi. Various welfare schemes were taken up by the Prime Minister for the people of the country and to honour and respect his life activities achievement, a weeklong birthday celebration is observed as Sewa Saptah, she added.

Presentation of gift items to the BPL widows was the main programme of the function.

The programme was also attended by various officials and leaders of BJP Manipur Pradesh and CVO leaders of Moreh.

Meanwhile, BJP Mandal Tengnoupal observed Sewa Saptah at Tengnoupal district. It was observed under the leadership of vice-chairman of ADC Chandel, Tongpao Mate and executive members of BJP Tengnoupal Mandal along with all party members. As part of the celebration, 70 tree saplings were also planted.

In a separate programme, awareness on COVID-19 and distribution face masks and posters was also held in the district under the leadership of vice-chairman of ADC Chandel, S Tongpao Mate.