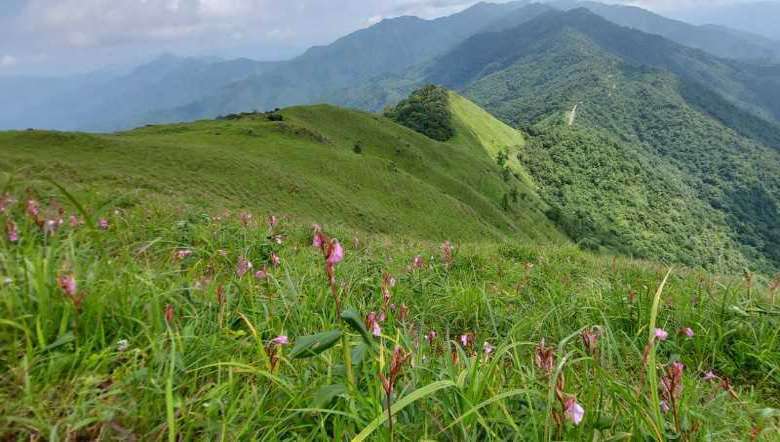 The beautiful Pink Orchid Ginger-Shingcha Wuyawon at Wuya-Kachui in Kamjong district of Manipur is facing extinction today due to increased chromium mining at Shingcha-Gamnom village in the district. It is learned that Rourkela Minerals Company (ROMCO) has been carrying out chromium mining at Gamnom-Shingcha village at the Mining Lease (ML) area measuring @ 85.0 hectares for 20 years.

Wuya-Kachui It is located at about 45 km from Ukhrul headquarters and 90 km from capital Imphal. It takes about 15 minutes’ walk from the main road to reach Wuya Kachui. The place is foggy most of the time. The village is surrounded by villages such as Maka, Pushing, Khangkhui, Langkhe etc.

Wuya-Kachui, covered with the beautiful pink orchid ginger flowers during summer months, is a huge attraction for tourists. The peak blooming period starts from July 15 till July 25. People from far and wide often come to visit the place.

This rare species of Pink Orchid ginger flower is also found in the Eastern Himalayas, in Assam, Bangladesh, Bhutan and other Indo-China region, including Myanmar.

According to Shingcha villages, the name Wuyawon was taken from the mountain it grows called Wuya Kachui. The botanical name of Wuyawon is Caulokaempferia Secunda belonging to Zingiberaceae, ginger family. Legend has it that the word Wuya means nightmare. It is said that there was a legendary war hero of Shingcha village, a lone warrior called Maphat in the early 19th Century. When he halted on the mountain on his war retreat, he experienced sleepless nightmares. Thence, the name of the mountain was so named as Wuya-Kachui which means mount of nightmare. And so was the name Wuyawon christened after the mount.

The youth organization of Shingcha village has been taking up different initiatives to conserve and promote Wuyawon. The local youth had organised the third Wuyawon Festival in July 2019. Such initiatives to spread awareness on conservation of the flower was held since July 2015. However, in 2020, the place was banned for tourists during the blooming moth July owing to the pandemic.

Meanwhile, profit-driven mining companies have been intensifying chromium mining at the Wuya mountain. The Directorate of Trade Commerce and Industries (DTCI) Manipur granted the Mining Lease in August, 2018 with the project cost of Rs.50 crore. Subsequently, the government of Manipur and Rourkela Minerals Company (ROMCO) Pvt Ltd signed an agreement on February 23, 2019 for taking up chromium mining at Shingcha-Gamnom under Kamjong District in Manipur @ 85.0 hectares for 20 years. ROMCO submitted Form-I, Draft Terms of Reference (ToR) and Pre-Feasibility study Report (PFR) for approval of ToR for mining on December 3, 2019 with the government of Manipur and with the Environment and Forest Climate Change Ministry (MoEFCC).

Remarkably, the whole process of engagement, pre-feasibility study report and signing of MoU were done without free and prior informed consent (FPIC) of the concerned village. Villagers are confused and have untold apprehension regarding the proposed chromium mining which is resulting in plundering of their land and resource along with Wuyawon in total absence of the acknowledgement of the villagers who have been its traditional owner since their forefathers’ time.

It may be noted that the Pre-Feasibility Report (PFR) prepared by the mining company described the mining lease area at Shingcha-Gamnom is devoid of forest or jhum cultivable land and the entire mining Lease area as unclassed government land happened to be a complete misinformation that all land areas in the village are useful for different purposes and in fact, the eastern side of the Wuya-Kachui is thickly forested.

According to the villagers, the entire land, including the Wuya-Kachui, a major portion of chromium deposit, is owned by the community. Hence the plan to extract chromium from the village without FPIC is a violation of rights of the community over their land and resources. Customary land and resource rights as well as aspirations of the villagers deserve due recognition which is absent in the proposed Chromium mining at Shingcha village.

Shingcha, a Tangkhul Naga village is a major tribe/indigenous people of Manipur whose land and resources belong to them. The villagers have been surviving through ages with the power of their land and resources.

Any alienation of land falls under the purview of the Hill Areas Committee (HAC) under Article 371 C of the Indian Constitution. But the same has been sidelined in the chromium mining process at Shingcha village.

Forest and Environment clearances are mandatory for mega projects like mining. The same is undermined in the proposed chromium mining in the village. Report of the ROMCO in the PFR stating as there are no forest areas in the Mining Lease is nothing but simplifying their extraction process without clearances. In fact, extensive chromium mining will adversely affect the surrounding natural conditions and livelihood of the villagers. Additionally, the naturally blooming rare Pink Orchid Ginger-Wuyawon will become extinct.

As mentioned earlier, villagers of Shingcha have close socio-cultural affinity with the Wuya-Kachui. There are folk songs on the Wuya-Kachui and the beautiful Wuyawon.

It is very crucial to be aware of the health impacts of previous chromium mining in India. Odisha is one of the Indian states where the largest chromium mining was operated. It has become a victim of waste materials, rocks, chemical and pollution containing toxic hexavalent chromium, a cancer causing element. There have been many diseases caused due to pollution of ground and surface water. It is noteworthy that according to the US-based Blacksmith Institute in 2017, Sukinda valley of Odisha is the tenth most polluted region in the world due to chromium mining. The same is not addressed in chromite mining plan at Shingcha.

The push for chromium mining at Shingcha in Kamjong district, Lunghar village in Ukhrul district and others in Tengnoupal and Chandel district of Manipur that destroy people’s land, forest and river/streams will undermine the sustainable development by impoverishing the indigenous people as well as destruction of forest areas and land will enhance the menace of climate change.

Wuyawon of Shingcha village that has been in blooms through generations is facing a perilous situation today in the wake of heavy chromium mining. Whenever the plan of mining in village comes into reality, it will be definitely a doom for the rare pink orchid ginger- Wuyawon. Along with this, historical, socio-cultural and economic relationship between villagers and the Wuya-Kachui and Wuyawon will be lost as well. The same will also hurt the sentiment of the local youth who have been making effort to conserve and promote Wuyawon considering its long-term prospective.

Further, chromium mining at the village will lead to marginalization, loss of livelihood and villagers have to surrender their traditional land, forest and resource ownership which they possessed since time immemorial. It is a serious concern that forced extraction of mineral at Shingcha without proper consultation with the concerned community people will add up another chapter of unjust kind of development in the history of project intervention in Manipur. There is a call for save and conserve Wuyawon, save Wuya-Kachui, desist forced plundering of indigenous peoples’ resources without recognizing their community’s rights and need adherence to sustainable development goals.