The cease work will continue until their demand is fulfilled, the MGNREGS employees said. 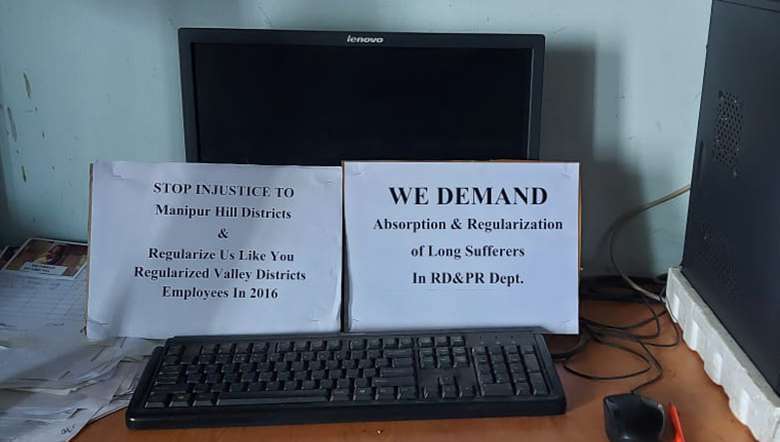 MGNREGS employees of five hill districts of Manipur under the banner of All Manipur Hill Districts MGNREGS Employees Association (AMHDMEA) has ceased work beginning Wednesday, saying the state government has failed to meet their demand for regularization of their service. They said the cease work will continue until their demand is fulfilled.

AMHDMEA president Sholim Haokip has issued a notification dated September 15, 2020 for beginning of the agitation by ceasing work from September 16, 2020 since the state government has failed to meet their demands even after repeated approaches to the concerned authority.

The Association on August 25, 2017 had submitted a representation to the concerned authority for absortion of MGNREGS employees of the hill districts namely Chandel, Churachandpur, Senapati, Tamenglong and Ukhrul.

The Association had also made a representation addressed to the state chief minister on November 6, 2018 for the same reason. The association plans to hold a meeting on September 18, 2020 at Imphal and chart out further course of action.

Secretary of Dedicated MGNREGS Staffs of Ukhrul and Kamjong Districts, Ramkui Chahong informed this correspondent that "MGNREGS was first launched during the UPA Government in 2006 incorporating 100 rural districts of India. In Manipur, the scheme was first launched in Tamenglong district in 2006. In the valley districts of Manipur, the scheme was implemented only in 2010. We appreciate the decision of the state government of Manipur to regularised the 191 MGNREGS Employees of valley districts namely Imphal West, Imphal East, Thoubal and Bishnupur in 2016. However, leaving 129 of the five hill districts behind amounts to unequal treatment".

A decision taken by the state cabinet meeting held on December 24, 2016 and on the recommendation of the Screening Committee, the Governor of Manipur has issued an order dated December 31, 2016, for the regularisation and absorption of 191 direct recruit district contract employees of various categories of NREGA in Rural Development and Panchayati Raj, Government of Manipur against the posts created vide order no.1/25/2014-RD (MGNREGA) dated December 31, 2015.

President of Dedicated MGNREGS Staffs of Ukhrul and Kamjong Districts, Yaoleithing AW informed that "some have given more than 11 years of service and others 10 and 8 years. On behalf of the employees, he appealed the concerned authority to kindly addressed their long sufferings of the 34 employees of Ukhrul and Kamjong Districts, out of which 10 are engaged as Technical Assistance and 24 are being utilised as MIS staff. He also appealed the public to kindly bear and show their support in this hardest time.

In this regard, The Tangkhul Naga Wungnao Long (TNWL -Tangkhul Naga Chiefs’ Association) has expressed concern over the state government’s continued failure to fulfil the demand of All Manipur Hill Districts MGNREGS Employees Association (AMHDMEA) for regularization of their service. The Association has vowed to support any democratic steps taken by the AMHDMEA. Secretary of TNWL, DS. Zimik recalled the statement of the Manipur chief minister on June 4, 2019 during the cabinet meeting held at Ukhrul, where at the sideline of the cabinet meeting, Biren had mentioned that if the MGNREGS employees from the valley had been regularized, then, the MGNREGS employees in the hills districts should be given the same yardstick. Zimik said it has been more than a year, but nothing has come of it yet.