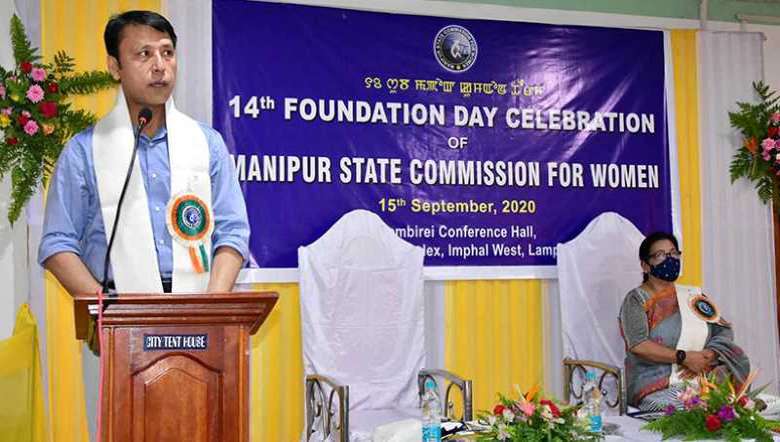 Education, Labour and Employment Minister Thokchom Radheshyam has called for regular awareness on public legal education to empower individuals regarding issues involving the law. He was speaking at the 14th foundation day celebration of the Manipur State Commission for Women (MSCW) observation held at the Kombirei Conference Hall, DC Office Complex, Imphal West.

The minister stated that the first approach by an individual in any case related to crime is the police station followed by the court. Unfortunately not many people are aware about the legal system. It is imperative to create awareness on legal system comprising activities intended to build public awareness and skills related to law and the justice system.

Th Radheshyam lauded the activities of MSCW for counseling the police department on handling cases of crime against women. He added that the judiciary, commission and other related forums have been addressing the concerns of the people in an exemplary manner. There is relatively low rate of discrimination in the State on gender, caste, creed or religion. However in recent times, cases’ related to crime against women are increasing in the State. It is therefore important to find out the facts related to crime against women, domestic violence in the state.

He also stated that women are majority workforce in many service sectors’ and in the education department in the State around 70% of the employee comprises of women. He emphasized the need to empower women in political, social and economical sphere so that they continue to play important roles in making the society better for the future generation.
Chairperson, MSCW, Prof Binota Meinam in her speech highlighted the three indicators for gender equalities – health, education and unorganized sector. In every society women have been working and contributing for the growth of the economy and it needs to be credited and accounted by the society.

During the observation, achievers for contribution on gender justice were felicitated with mementos and certificates. A newsletter, ‘Women News Horizon’ (Vol. - IV) was also released during the function and draft copy of ‘Gender Policy & Budgeting’ was also handed over to the minister. The observation was attended by judges, district SPs, legal experts and top civil officials. (DIPR)