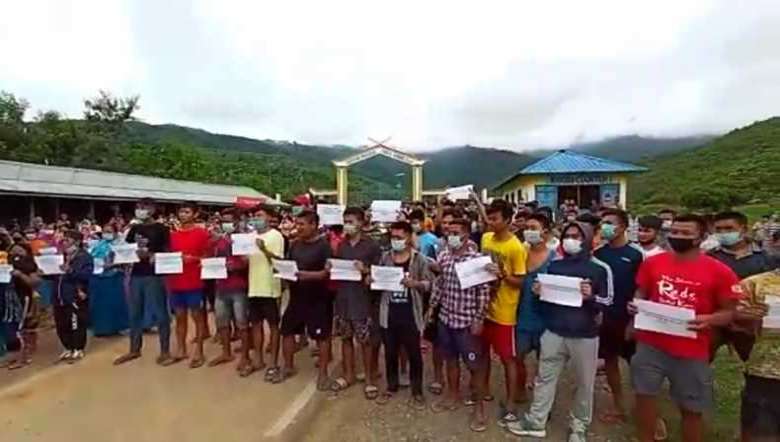 Amid the Covid 19 pandemic, irate locals of Andro on Tuesday erupted into protest, decrying a tender notice served by the Tourism Corporation of Manipur Ltd, directorate of Tourism of the state government, contending that the move violates democratic rights of the people.

The said tender, which was served on September 7, is for operation and maintenance of the popular tourist destination ‘Santhei Natural Park’ Andro, Imphal East under Public Private Partnership (PPP) model.

Speaking to the media, Kh.Pishak, secretary of the managing committee of the park said the Tourism directorate has served the tender notice without consulting the key stakeholders of the park, which consist of the local club and meira paibis.

Pishak said, “The people of Andro, particularly of Kharam Leikai have been taking great care of the Santhei Park. We have been maintaining the fragile ecological balance of the park with the help of our indigenous knowledge.That is why thousands of people throng the park either for picnic or sight seeing through out the year.”

Pishak continued that the people of Andro smell a foul play on the part of the Tourism directorate of the state government by floating a tender notice without consulting the local people.

“We feel that the notice is being served in vested interest of some individuals. That is why there is so much resentment among the public. We want to stay home safe amid the pandemic but we need to raise our voice,” he added.

A large number of people had gathered around the entrance gate of the Santhei Natural Park, shouting slogans against the tender notice.

Pishak cautioned that the agitation will not be called off unless the Tourism directorate withdraws the tender notice.

“The state government and its department concerned must respect the wishes and the sentiment of peace loving Andro indigenous people. And if at all the government is serious about redeveloping the park, it shouldn’t bypass the people of Andro,” he asserted.

It may be noted that locals of Andro Kharam Leikai, in a public meeting held on September 13, had collectively reaffirmed that “the Park Committee run by the people of Andro will continue to look after the park.”

The public meeting also took resolution that the proposed PPP model floated by the Tourism directorate is against the wish of the people, and accordingly the directorate should respect it.

The gathering also unanimously decided that the directorate should bear the consequences if it sticks to work against the wishes of the Andro people.