Man in a hurry

While kicking off the election campaign in Wangoi, Manipur, NPP Chief Conrad Sangma was full of fire and brimstone. The sentiment is right. But, it takes much more than sentiment to woo the people of the Northeast. 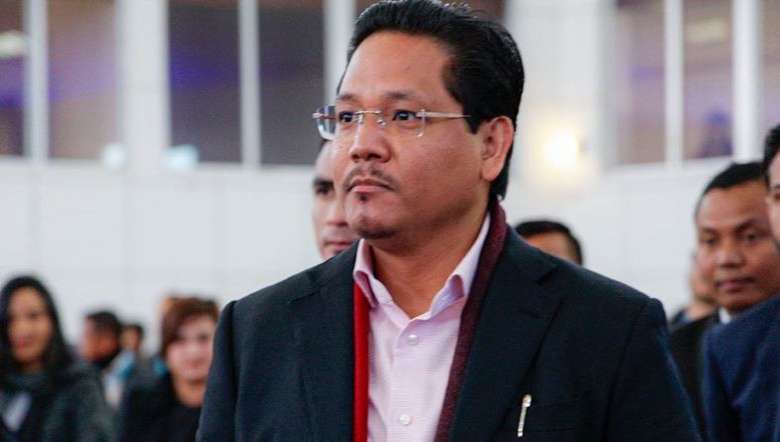 Clearly, the National Peoples’ Party (NPP) chief and Meghalaya Chief Minister Conrad Sangma seems to be in a hurry. He has set his sights high on the altar, at the forefront of creating a level playing field at the national level for the Northeast. Of course, he is following in the footsteps of his father Purno Agitok Sangma, a man from Garo Hills, who went on to become the first Lok Sabha Speaker from the Northeast and also a Presidential candidate. He was defeated by the late Pranab Mukherjee. A former Congressman, PA Sangma parted ways with the grand old party in 1999 alongwith Sharad Pawar and Tariq Anwar over the foreign origin issue of Sonia Gandhi, and went on to form the Nationalist Congress Party (NCP). On 5 January 2013, Sangma launched the National People’s Party, which has its origins in the hills of Manipur, at the national level. The NPP managed to win two seats in the Meghalaya Legislative Assembly in the 2013 election. After Purno Sangma’s death in 2016, his son Conrad was anointed the party chief. In the 2018 assembly elections, although the NPP came second to the Congress Conrad managed to cobble together a coalition with BJP and some regional parties to form the government in Meghalaya, very much in the lines of the BJP led government in Manipur.

When the NPP was able to win four seats in the Manipur Legislative Assembly in 2017, Conrad Sangma then a young Opposition leader in Meghalaya was able to extract his pound of flesh from BJP wresting ministerial berths and plum portfolios for all his MLAs. A helpless BJP had to contend with only five including the Chief Minister much to angst of the BJP MLAs, which provided a fertile ground for dissension in the party ranks. However, the insatiable push for more power forced the BJP Chief Minister to seek new friends from among the Congress flock to ward off pressure from NPP. In the 2019 Lok Sabha elections, NPP foisted its own candidate Thangminlien Kipgen in Outer Manipur constituency, while supporting the CPI candidate Dr M Nara in the Inner Manipur constituency. Just before the recently concluded Rajya Sabha elections, the four NPP MLAs withdrew their support from the coalition government and extended their support to the Congress candidate, leading to a high voltage political drama which the Chief Minister N Biren Singh ultimately won with his ingenuity. Only after direct intervention of Conrad Sangma and NEDA convenor Himanta Biswa Sarma, and shuttling back and forth from Imphal to Delhi, did they came back to the ruling coalition.

But, this time also NPP managed to extract their pound of flesh yet again, much to the disappointment of MLAs aspiring for ministerial berths.

Now again, NPP is preparing to field candidates in the ensuing by-elections of five assembly constituencies following disqualification and resignations of some MLAs. While kicking off the election campaign in Wangoi, NPP Chief Conrad Sangma was full of fire and brimstone. Celebrating the status of a national party and its footprint in four states of the Northeast, Conrad Sangma talked of providing leadership at the national level for the Northeast people. He also talked of Northeast people being given second-class treatment in the cities of mainland India and promised a platform for the NE people to gain respect both in Parliament and from the people of mainland. The sentiment is right. But, it takes much more than sentiment to woo the people of the Northeast.

Questions remain as to whether Assam will give space to a leader from Meghalaya to lead the region at the national level. There is also a fact that, Manipur has been the only state to challenge the leadership of Assam in Northeast, be it in terms of politics or civil society movements. Purno Sangma was very much liked and respected across the region, which was gained through years of experience and performance at the national level. He was a giant. But, Conrad Sangma has much to learn about the dynamics of the region called Northeast.