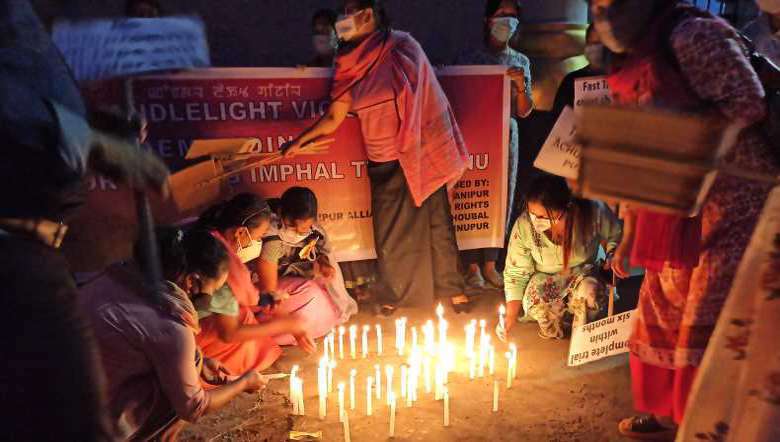 Representatives of the Manipur Alliance for Child Rights (MACR), the Women in Governance (WinG) Manipur, the Childline Thoubal and the Bishnupur, Extrajudicial Execution Victim Families Association Manipur and the New Life Foundation were present at the Palace Gate where the candlelight vigil was held.

Speaking to mediapersons, WinG Manipur convenor Nonibala said that the candlelight vigil is held for fair and speedy justice for Mayang Imphal Thambalnu.

A memorandum has been submitted to the chief minister by MACR and WinG Manipur, demanding fair and speedy justice on alleged gangrape and murder of a 14-year-old girl from Mayang Imphal area of Imphal west, and for institution of a ‘State Rape Victim's Fund’ in memory of the victim.

She said painful and gruesome incidents of crime against girl children, even during the COVID -19 pandemic have been taking place in the state. A minor girl named ‘Thambalnu’ a14-year-old from a village in Mayang Imphal, Imphal West district was gangraped and murdered.

The memorandum mentioned that in the late evening of September 2, she was called out by her boyfriend, under the pretext of elopement and then allegedly kidnapped and gangraped the girl by himself and his other accomplices.

The minor girl was abandoned by the culprits near a place called Yendaopat, as they thought she was dying, it stated. On the next morning, on September 3, passersby found her in a semi-conscious state with multiple injury marks, it stated. Later, she was hospitalized at RIMS Hospital, and kept in ICU; however, she breathed her last on September 4, it added.

It mentioned that the death body was claimed by the bereaved family only on September 10. So far, altogether six accused have been arrested by the police, while one perpetrator is still absconding.

The organisation urges to ensure the police investigation is expedited and made complete within 15 days, it stated.

The six accused are already in judicial custody and the statement of two accused have been taken, it further stated.

There has been confession by the surrendered accused persons as well, besides the dying statement of the victim was already recorded. Now, there are no other visible reasonable grounds, which would necessitate the police to take more time for submission of chargesheet later than 15 days, it added.

They strongly demanded to ensure that the trial is completed by the Special POCSO Fast Track Court concerned within the prescribed six month period as per the provisions of The Protection of Children from Sexual Offences (Amendment) Act 2019.

They urged to take up necessary administrative and legal measures, to keep the confidentiality of the victim's identity such as name, photo, exact address, other remote facts which may lead to identify the victim are not disclosed in media and social media. Such disclosures have been prohibited by laws such as section 228A IPC, Section 73 of Juvenile Justice (Care and Protection of Children) Act 2015, and Section 23 of The Protection of Children from Sexual Offences (Amendment ) Act 2009, it stated.

Despite such prohibitions, social media and some media houses are disclosing the names and photos of the victim, the memorandum stated.

It fervently requested the state authority to instate a ‘State Rape Victims corpus fund’ in the manner of ‘Nirbhaya Fund’, in the profound memory of the Mayang Imphal Gangrape victim, such as “MI Thambalnu Fund for Victims of Rape".

It mentioned that the proposed pseudonym ‘Thambalnu’ is inspired by the legendary female character of the 19th Century who is known as ‘Yairipok Thambalnu’.

The same name has been inferred as a symbol and testimony of poor and marginalized female victims of atrocity against women in our society, it added.

They also urged to upgrade the Forensic Testing lab in the state with all kind of high tech testing facilities, so that no sexual assault case remain incomplete, because of pending testing report from Labs in outside state.