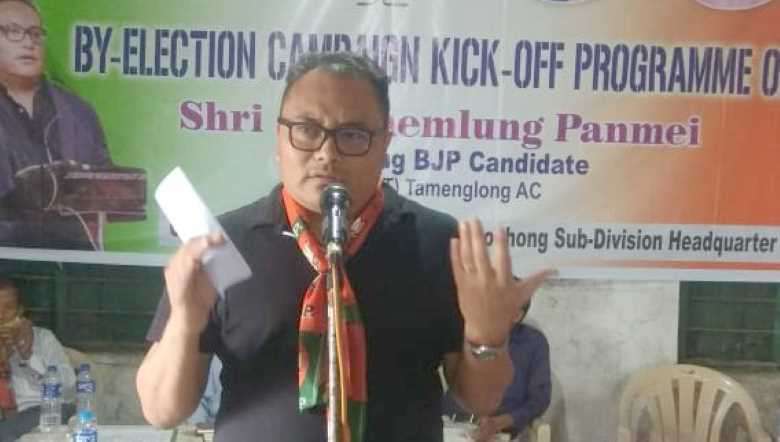 In a major setback to the Naga People’s Front (NPF) Manipur unit, as many as 17 leaders and officials left the party to join the state Bharatiya Janata Party (BJP) in Tamenglong on Saturday.

They have resigned from their primary membership to join and support former MLA Janghemlung Panmei, an intending BJP candidate in the forthcoming by-election.

A reception programme to welcome the resigned NPF officials and two ADC members was held at the residence of Janghemlung at Utopia Ward No 1 in Tamenglong ST Assembly constituency on Saturday.

“Do not believe that with the joining of 17 NPF leaders, Janghemlung Panmei will be successful in the forthcoming election; however, success depends on hard work. Let us therefore, work hard together hand in hand to win the forthcoming by-election,” Adim Panmei said.

Two ADC members also spoke on the occasion and they said that though they resigned from NPF membership, they would continue supporting the Democratic Alliance of Tamenglong ADC government led by its chairman Namsinrei Panmei.

They said that they had worked hard in the MP election for the NPF candidate and it was successful. NPF is very good but the situation demands choosing of the candidate and not the political party, Charles Liangdiyang said.

“To strengthen the BJP government of Manipur led by Chief Minister N Biren Singh and support the central government for the prosperity and development of Tamenglong district, we have decided to join BJP intending candidate Janghemlung Panmei,” Charles said.

A special blessing prayer was conducted during the reception of NPF leaders led by Inpui Baptist Church pastor Solomon Riamroi.

“This is my rare special day in my political career and a remarkable moment. You all have added new strength,” Panmei said.

Meanwhile, speaking to the media on the sidelines of the occasion, Naga People’s Front Tamenglong district president G Keikhumjanang said that seeing the work progress of BJP government in Tamenglong under the leadership of chief minister N Biren Singh and to strengthen his government, the 17 NPF leaders have resigned to join the BJP.

“The Naga People’s Front party is good and we loved it but we love the candidate more. Moreover, we believe and trust the CM N Biren-led government,” Keikhumjanang said. He also clarified that there is no conflict among the leaders of NPF.