Those who received assistance included eight beneficiaries in StandUp category, five in Revenue Stage and 259 in Idea Stage of the scheme. 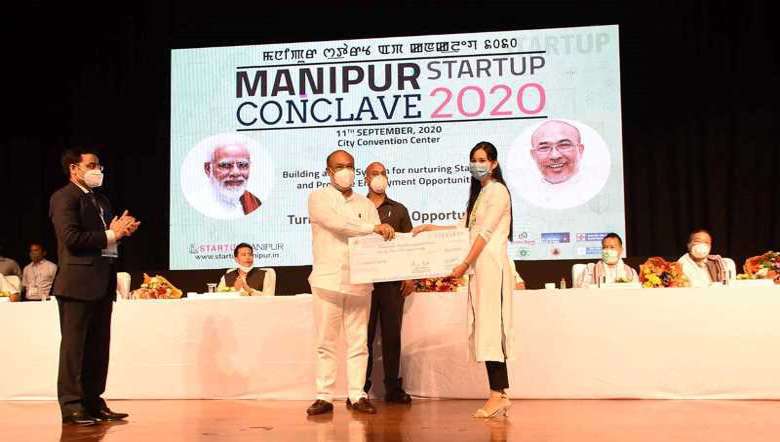 Chief Minister N Biren Singh handed over a total monetary assistance of Rs 525.09 lakh to 272 startup beneficiaries at the Manipur StartUp Conclave-2020 in Imphal on Friday. Those who received assistance included eight beneficiaries in StandUp category, five in Revenue Stage and 259 in Idea Stage of the scheme.

The Manipur StartUp-Conclave was organised by the State Planning Department at City Convention Centre, Imphal.

Manipur StartUp scheme was launched in 2017-2018 to build a strong eco-system for nurturing startups with an aim to drive sustainable economic growth and generate large scale employment opportunities. Three rounds of selection of beneficiaries have been conducted so far since 2017-18 and provided benefit to 877 StartUps. A beneficiary can avail up to Rs 1 crore with 30% subsidy depending on the scale of their business.

Speaking at the occasion as the chief guest, N Biren Singh said that there is no dearth of talent and incompetence in the State. Manipur StartUp was introduced to extend assistance and encouragement to hardworking young entrepreneurs. They had gained the much needed impetus in their business ever since the scheme was introduced in 2017, he said and added that he is pleased to see that many local entrepreneurs are able to enter the global platform now after receiving assistance from the state government through the scheme.

Expressing satisfaction about the good understanding being maintained between the Government and different banks in this regard, the Chief Minister said that it is due to this understanding that Manipur has been able to improve its economy in the past three years and a half. Apart from StartUp, N Biren said, these banks are kind enough to provide different loans to hundreds of hard working and deserving people on state government’s request. That’s how the present government has been able to build up a sound eco-system within a short span of time, he observed.

Informing that the state government is planning to provide bank loans to around 20,000 vendors whose business had been adversely affected by the prolonged lock-down, the chief minister urged the banks to expedite the process so that the vendors may restart their vending activities soon.

Mentioning further about Manipur StartUp, he said that applicants need not have any tension about closing dates from this year onwards because applications would now be received the whole year. New applications for the 4th Round will be opened very soon. It will serve as an opportunity to those, who have returned from outside the State leaving their job due to COVID-19 pandemic, to set up their own business units here, the Chief Minister said.

N Biren Singh also informed that the Civil Secretariat Complex located at Chingmeirong would be completed soon. For this, the chief minister said, the Housing and Urban Development Corporation (HUDCO) has agreed to provide Rs. 150 crore.

With the financial assistance from the same corporation, a guest house would also be constructed at an estimated cost of Rs. 260 crore at Old High Court complex, he said and added that an Art and Culture complex would also be set up on the State’s land recently retained at Gurgaon (Haryana). The chief minister also said that construction of a new Manipur Bhawan at Dwarka in Delhi would begin soon.

Manipur StartUp has four categories (i) Revenue (ii) Idea (ii) Entrepreneurs Support Scheme (ESS) and (iv) Stand Up Manipur (added in 2019-20 to promote first time venture of SC/ST/OBC/women/Minority/ differently-abled entrepreneurs).
Case studies of 20 Revenue StartUps/companies before funding 2017-18 and after funding 2019-20 under Manipur StartUp revealed that these companies have generated direct employment to more than 917, increased its customer outreach to 196,720 from 69,596 and increased its revenue from Rs 7.41 crore to Rs. 24.60 crore.