Chief Minister N Biren Singh also handed over an ambulance each to the chief medical officers (CMOs) of Noney, Imphal East, Tengoupal, Imphal West and the authority of the Directorate of Health Services. 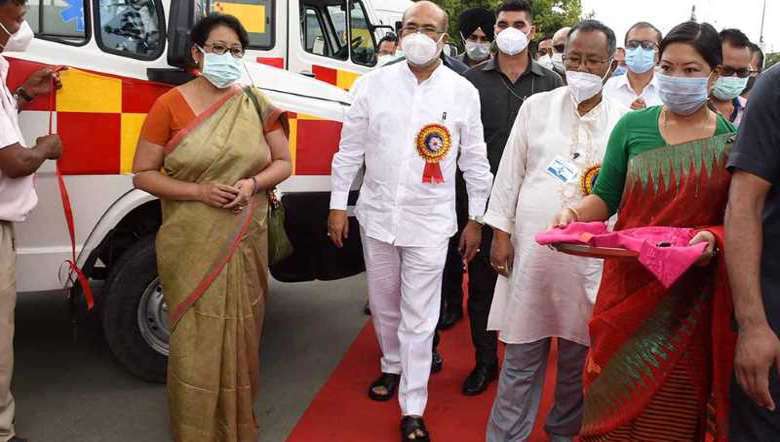 CM Biren hands over ambulance to CMOs on September 8, 2020

In a bid to strengthen the frontline warriors in the fight against COVID-19, Chief Minister N Biren Singh handed over an ambulance each to the chief medical officers (CMOs) of Noney, Imphal East, Tengoupal, Imphal West and the authority of the Directorate of Health Services at a function held at the western gate of the Chief Minister’s Secretariat in Imphal on Tuesday. He also ordered to serve show-cause notice to a private hospital for ignoring emergency case.

Speaking at the occasion, Biren said that apart from considering to open more COVID Care Centres, the state government is trying to fulfill other requirements one by one to effectively tackle the pandemic. As the virus is novel, it is hard to predict what shape the pandemic would take in the state, so there is need to remain alert and act accordingly from time to time, he asserted.

Maintaining that half-baked knowledge and opinions about the virus may create mass panic, the chief minister urged the public not to share opinion or apprehension based on assumption on the media. Whoever makes or circulates a false alarm or warning leading to panic is liable to be imprisoned up to one year, according to the Section 54 of the Disaster Management Act, 2005, he informed.

Also, expressing anguish over the incident of a private hospital not attending to an expecting mother which video went viral on social media, the chief minister asserted that there is no point in opening hospitals if there is no willingness to attend to patients who require medical emergency. Stating that the medical profession is known as a humanity service, the chief minister said that hospital authorities can’t think for money and business alone.

Biren also said that he had instructed the Principal Secretary (Health) to serve a show-cause notice to the private hospital concerned. He also sought for a collective effort to fight COVID-19.

In the past three months of the COVID-19 pandemic, the Government of Manipur has purchased 14 ambulances. The first two were handed over to Pherzawl and Thoubal districts in June this year. The next two went to Bishnupur district and the Directorate of Health Services in the same month. The Directorate’s ambulance is being used at COVID Care Centre, Lamboi Khongnangkhong. The 3rd batch of ambulances was handed over to Jiribam and Imphal West districts while three more ambulances will be given to the remaining districts in the next couple of days.

These are all additional ambulances to the existing ALS Ambulances on the road since 2018. The strength of the ambulance fleet which has been put on COVID duty 24X7 now stands at 25.