By January 1, 2021, Manipur may become the first state in Northeast India to go fully digital going by the encouraging response from the departments, the chief minister said. 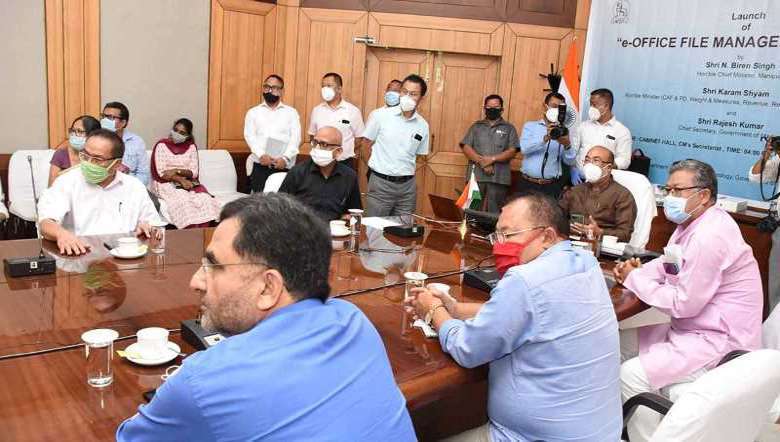 Manipur Chief Minister N Biren on Tuesday launched the e-Office File Management System of the state government, a move which the chief minister said was to maintain transparency and do away with the painstakingly slow file processing in government offices.

The domain name of the newly launched system https://eofficemanipur.nic.in was launched in a function held in the cabinet hall of chief minister’s secretariat in Imphal.

The chief minister said that the initiation of e-Office, which would bring transparency in governance, is the outcome of the hard work of the government officials. He expressed hope that it would ensure timely release of official files and corruption-free governance. He however, advised the officials to work with better coordination among them.

According to official sources, the e-Office application will ensure moving towards functioning of government offices with less paper and ushering in more efficient, effective and transparent inter-government and intra-government transactions and processes.

It is learnt that the first e-file for the State was moved on June 11 at 10.43 PM. The e-Office will be introduced in a phase-wise manner in all departments of the state government as well as in all the 16 districts of the state.

A top rung bureaucrat said that as many as 50 departments have adopted the new system in less than a month before adding that by October the state is expecting 60 percent by the end of October.

By January 1, 2021, Manipur may become the first state in Northeast India to go fully digital going by the encouraging response from the departments, he added.

It has been reported that a gap analysis of IT Infrastructure for successful roll out of e-Office was done in consultation with all departments. Based on the gap analysis, Digital Signature Certificates (DSC), Desktop, Scanner, Printers would be provided to Government employees. Additional funding would be sought to meet the requirement of the fund.

Further, Laptop Policy is being drafted which will provide laptops to all the government officers guided by this policy. This will encourage tovernment employees to work remotely during the travel and tour or work from home during possible pandemic-like situations.