The toilets were constructed by the District Water and Sanitation Mission Tamenglong (DWSM) under the Swachh Bharat Mission (SBM). 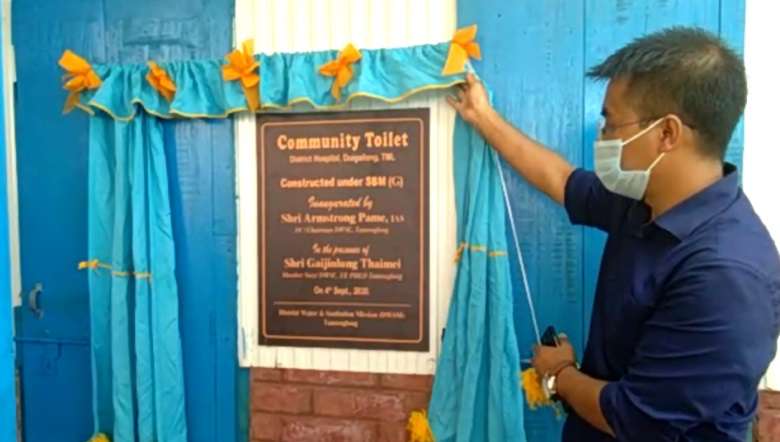 Addressing the gathering, the deputy commissioner pointed out the need to have public toilets at Haipou Jadonang Park, where public programmes are frequently organised both by government and civil societies.

“The community toilet will open only during day time and it will charge Rs 5 to help in the maintenance of the toilet. A drop-box will also be placed for collection of money, followed by fixing a CCTV camera outside the toilet to monitor the money deposited,” said Pame.

The toilets were constructed by the District Water and Sanitation Mission Tamenglong (DWSM) under the Swachh Bharat Mission (SBM). The DC urged all the people of Tamenglong to use the toilet properly by maintaining cleanliness in the public property.

Mentioning about the toilet constructed at the district hospital, Pame said that having a toilet in the hospital is one of the main necessities for the hospital administration. Every patient is accompanied by few more people and most of the time it is noticed that they have no place to use the toilet, and eventually they have to go inside the hospital or near the wards to find the toilet. In the process, the hospital becomes congested and even dirty, he added.

Pame said that regarding the issue of toilets, he had been consulting with the CMO and MS of the district hospital for the last few years and at last the community toilet was constructed under the Swachh Bharat Mission.

The deputy commissioner thanked Gaijinlung Thaimei and his team and expressed his hope that the medical team will make the best use of the toilet and the garage.