From whose guns the bullets were fired?

In a public rally organised by the United Naga Council (UNC) on August 30, 2014, Mayopam and Ramkashing were allegedly shot by security personnel after the rally spiralled out of control following a confrontation that took place between demonstrators and the security. 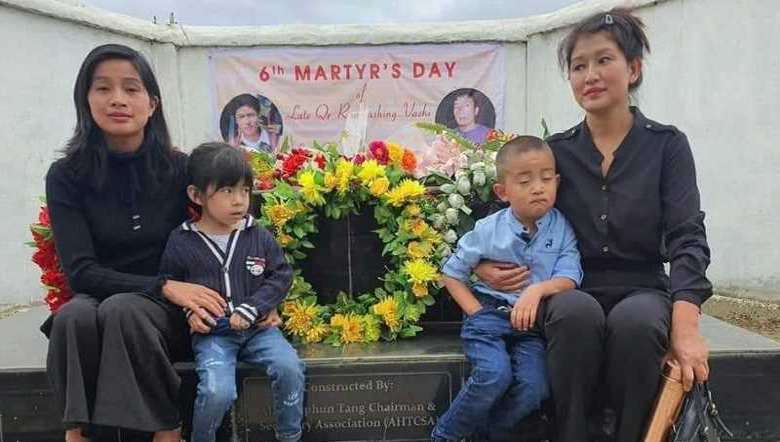 Recalling the death of Mayopam Ramror, his wife said, “It has been six years and I will never know who pulled the trigger and killed my husband. I want to know everything that happened on that day.”

The 6th Martyrs’ Day of Mayopam Ramror and Ramkashing Vashi was observed on Sunday at TNL Ground with the attendance of Tangkhul community leaders and family members of the two martyrs. However, due to the prevailing pandemic, the observation was carried out in low key affairs.

In a public rally organised by the United Naga Council (UNC) on August 30, 2014, Mayopam and Ramkashing were allegedly shot and killed by security personnel after the rally spiralled out of control following a confrontation that took place between demonstrators and the security.

The security personnel started firing tear gas and rubber bullets when a large number of people, who came out to protest the prolonged curfew in Ukhrul, tried to reach the Tangkhul Naga Long (TNL) ground by breaking police barricades. Till date, no one knows from whose guns the bullets were fired that killed the two rallyists.

Rosedinah, wife of Mayopam and Chanreiwon, wife of Ramkashing were both pregnant at that time. Each gave birth to a son in the following months.

Rosedinah said, “Family and friends informed me that he was shot in the arms. I desperately tried calling his number. After trying for many times, my elder brother answered the call and told me to be calm. I was informed that he was being given treatment at the hospital and would be back in the evening”.

“In the evening, relatives and friends started pouring into our house. Sensing fear that something drastic might have happened, I enquired one of my relatives to tell me what actually had happened to my husband. She did not say anything, but I realised something worse had happened. It was only late in the evening that they broke me the actual news that he was no more,” she said.

"Our son Ngahanngai Ramror is going to be 6-year-old soon and he wishes he had someone to call Āvā (father)," she said. “Sometimes, he would suddenly ask where his father is. I tried to explain but no words would come out. Only tears. It is very painful to explain to my son. I have shown him the grave at TNL Ground, where he was buried along with his friend Ramkashing Vashi. I am yet to explain how he died. When he grows older, I will surely tell the story. For now, I can only meet his queries with silence and tears,” she added.

Rosedinah Ramror runs a tea stall at Wino Bazaar. Before the pandemic lockdown, she would drop their son at his pre-school and rush to open the tea stall, and then run along to pick up their son from his school.

“I was at home waiting for my husband to come back home. I had boiled hot water for his bath. I was pregnant that time. I came to know suddenly that my husband was no more when two elders from our village came and informed the news to my in-laws,” she said.

“My son is almost 6-year-old now and is studying in U-Kg at Ukhrul Central School. I want to know what actually happened that day and who killed my husband. I have accepted that he gave his life for a noble cause and that solace and comfort is enough to forgive the killer,” she added.

Chanreiwon Vashi runs a garment shop at Ukhrul to support their son and meet their daily expenses.

The public rally was organised demanding expedition of the settlement of the Naga issue. It also demanded to stop militarization and to protest Section 144 CrPC, which was imposed since July 13, 2014. It demanded respect for the ceasefire agreement and to honour the democratic dialogue on alternative arrangements between the government of Manipur and UNC.

The rally was opposed by the Manipur government on the grounds that it would endanger public peace; and a huge contingent of police forces and commandos from other districts (Imphal East, Imphal West, Thoubal and Bishnupur) were also dispatched to Ukhrul town.

Due to the alleged indiscriminate firing by the commandos and IRB personnel two people were killed and 34 others critically injured.

The UNC on September 1, 2014 while condemning in the strongest term, the killings and violence of the state government perpetrated on the rallyists on August 30, 2014 at Ukhrul, declared late Mayopam Ramror and late Ramkashing Vashi of Teinem Village as martyrs of the Naga cause.

An appeal letter, addressed to Prime Minister of India, Narendra Modi by 12,507 citizens of Ukhrul as signatories was also submitted on September 8, 2014. The mass signatures campaign called for urgent attention to the issue to prevent the escalation of violence and to bring back normalcy, centrally-constituted judicial investigation into the incident and also the preceding events and immediate withdrawal of the Manipur Police Commando and Indian Reserve Battalion (IRB) from in and around Ukhrul district, Manipur. On the following day, IRBs and commandos stationed at various places of Ukhrul district were withdrawn.

Justice seems far away for the families and loved ones of Mayopam and Ramkashing. They have to move on with time. Yet, they seem to be stuck at that point of time when the lives of their husbands were cruelly ended.