The programme began with floral tributes to the hockey legend major Diyan Chand as National Sports Day is being observed on his birthday. 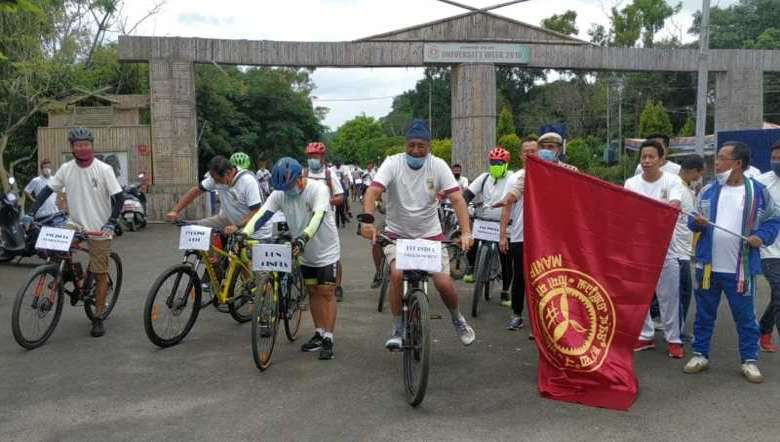 The Fit India Campaign Committee, Fit India Club department of PESS and NSS Cell, Manipur University, Canchipur under the aegis of Ministry of Youth Affairs and Sports, government of India jointly organised an ‘Observance of National Sports Day’ on Saturday morning at Traffic Point, MU, Canchipur as a part of ‘Fit India Movement’.

A release stated that a team of cyclists from Manipur Adventure and Mountain Biking Association (MAMBA) under the leadership of deputy superintendent, RIMS, Dr  Nepram Sanjib Singh, attended the observance and took part in the cycle rally as a part of Fit India Freedom Run.

The observance programme began with floral tributes given to the hockey legend major Diyan Chand as National Sports Day is being observed on his birthday, it stated.

Convenor, FICC and FIC, MU Canchipur L Santosh Singh, welcomed the dignitaries and invitees, it stated. He highlighted the theme of the campaign and importance of observing National Sports Day and Twelve Days campaign for Fit India Freedom Run, it stated.

Jarnail Singh as the presidium member expressed the importance of keeping fit and emphasised one should invest in the fitness of body and mind, it added.

Professor R A S Kushwaha expressed that the observation of National Sports Day will certainly enhance the spirit of sportsmanship in our country, it stated. Professor Ch Yashawanta Singh opined that fitness is becoming a primary activity of a person in his daily lifestyle, it stated. The role of sportsmen in every walk of life in the present world has been appreciated with the remembrance of major Diyan Chand as an exemplary sportsman in the country, it added.

Further it stated that professor Th Ratankumar Singh also expressed the importance of running as an exercise. NSS Cell Coordinator, K Shitaljit Singh presented the vote of thanks.