Union Commerce and Industry Minister Piyush Goyal was apprised to consider a promotion policy for entrepreneurs of Northeast region considering the topography of the region, during a video conference interaction. 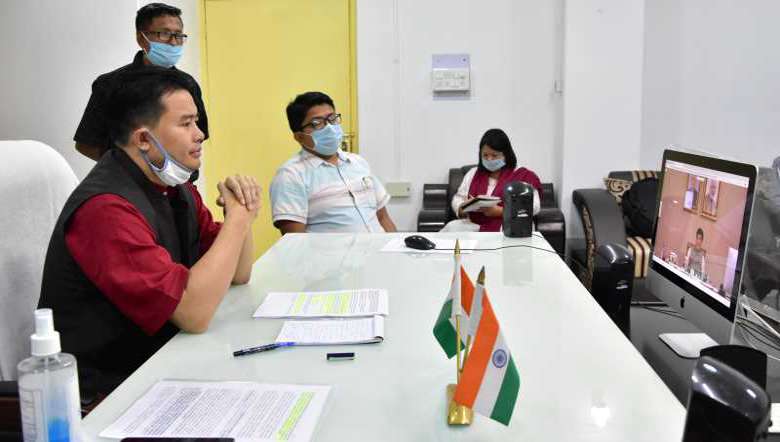 Biswajit attended the VC from his Secretariat office. Piyush Goyal conducted a video conference interaction with Industry Ministers of all states on “One District One Product Initiative”, a move towards “AatmaNirbhar” Bharat.

As a part of the VC, the Union minister also launched a Geographical Information System online land bank in six states through video conferencing which was attended by Commerce and Industry ministers from across the country.

Speaking at the VC, Biswajit highlighted that due to the geographical location, Manipur and other states of the region face logistics and transportation problems and as such entrepreneurs of the region face problems in competing with others from outside the region. Considering these issues, he apprised the union minister to consider a promotion policy for the entrepreneurs of the state as well as others of the NE region.

The minister highlighted several issues of the State to the Union Minister. He said the State under the present BJP led government has started export of certain products of the State like ginger, turmeric, pineapple, black rice, etc. he said that it is believed that the State has deposit of lime stone and chromite and that the government is seeking clearance for exploration of the same from the Central Ministry. We have already identified the deposits, he added.

He further stated that the State will identify the districts for the implementation of the One District One Product Scheme and to submit a report on the same within a week.

It may be mentioned that the objective of the interaction is to put ina place an institutional mechanism to propagate “One District One Product” as a movement in the country, with the help of all State governments. Every State Union Territory must identify one product per district, based on the potential and strength of a district and national priorities; develop a cluster for that product in the district which is capable of producing world class product with quality, scalability and a brand; and provide market linkage. It is proposed to drive this on a Mission mode with specific targets set to be achieved by 2022, when the country celebrates the 75 years of independence.