Biren said the water treatment plant at Mongsangei will prevent toxic water from flowing into the Loktak Lake. 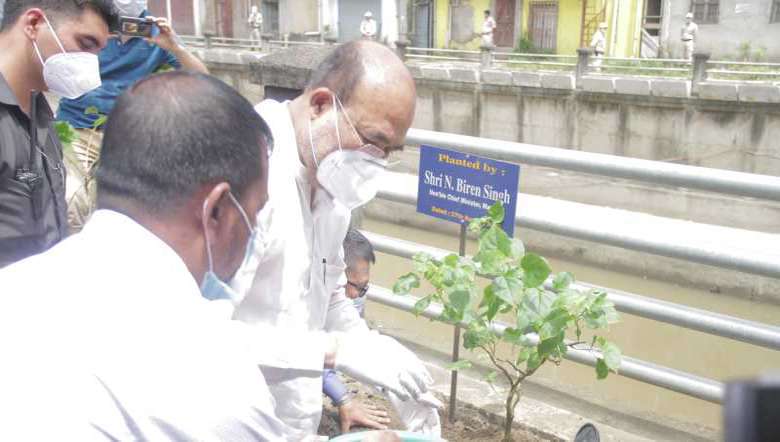 Manipur Chief Minister N Biren Singh on Thursday said that the Nambul river can regain its natural state if sewage and other wastes from localities can be stopped from being dumped into the river.

Under the Nambul Rejuvenation Project with an estimated cost of Rs 95 crore, a sewerage pipe near the river banks will be installed, wherein it will carry the wastes from the localities to the water treatment plant at Mongsangei, the chief minister said.

Biren was speaking to the media after inspecting the condition of the river as a part of the programme held for planting tree saplings alongside the river from Waheng Leikai to Keishampat Junction. Biren said that the water treatment plant at Mongsangei will prevent toxic water from flowing into the Loktak Lake.

The chief minister also mentioned that the peculiarity of the Nambul river is that it flows through the middle of the city. Since 2004, efforts have been made to develop and maintain the river and the result and changes can be seen now, he said.

The work to plant Bougainvillea which thrive well with the soil of Manipur has been taken up on both sides of the river to attract tourists. The flowers will be planted from Thongnambonbi to Keishampat and it will continue further at the remaining river banks of the city, he added.

Commenting on the progress of Nambul River Rejuvenation Project, Biren said, “The project is still going on and it will be wrong to assume at the moment that the project is successful”.

Responding to a query from the media regarding the delimitation issue in the state, the chief minister said that the government as the representative of the people made it clear that delimitation should be conducted only after conducting a new census.

Forest and Environment Minister Awangbou Newmai said if the river banks in the city are beautified and maintained properly, it will make the city more beautiful. It will also create awareness to the people on the government’s plan to save the river, he added.

To prevent pollution of rivers, the state government in March 2019 launched the project for rejuvenation and conservation of Nambul river under the Nambul River Conservation Plan, (NRCP) of the Union Ministry of Environment, Forest and Climate Change, he said.

In a bid to save Nambul river, a boat rally was also conducted in the river stretch from Imphal to Bishnupur district on July 2 this year.

Deputy speaker of Manipur Legislative assembly, K Robindro, deputy chairman of  State Planning Board S Rajen Singh and other government officials were present at the occassion.

It may be recalled that the Imphal Free Presshad strongly raised concern over the state of the river in its report dated July 10, 2020.