As the town that once bustled with business activities wears a deserted look, the question of survival of the locals whose sole livelihood was border trade hangs heavy with no sign of the situation easing any time soon. 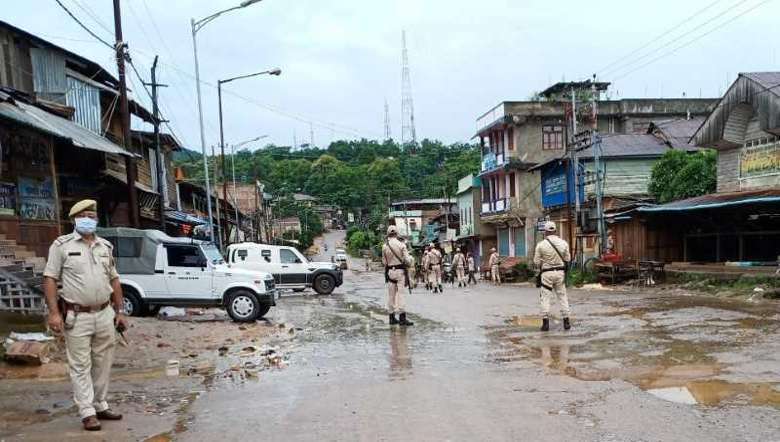 International border town Moreh, the gateway to Southeast Asian countries, lies in the eastern corridor of India. Before the nationwide lockdown was announced by Prime Minister Narendra Modi on March 24, trade between India and Myanmar flourished in this commercial hub of Manipur, which falls under Tengnoupal district. All types of business activities thrived in this trade centre, attracting hordes of visitors to the place. In fact, border trade is the most viable means of livelihood for the people living in the region. But now the border gates are sealed, trade has stopped, markets are empty and life has come to a standstill with lockdown enforced in entire town for the past five months. As the town that once bustled with business activities wears a deserted look, the question of survival of the locals whose sole livelihood was border trade hangs heavy with no sign of the situation easing any time soon. Covid-19 transmission is rapidly spreading and the situation in the state is worsening by the day.

When lockdown was first enforced in the state on March 23, a day ahead of the nationwide lockdown, to prevent the spread of Coronavirus, an order issued by Special Secretary (Home)-H Gyan Prakash stated that the Indo-Myanmar border in Manipur sector would remain closed and prohibited movement of people across the border. Since then, the Indo-Myanmar border Gate No I and II at Moreh town remained closed. Police and paramilitary force are deployed at the international border to check the movement of people across the border. Also, the government has intensified the work of the international border fencing. The district administration and police personnel have taken up the work strictly.

Although Moreh is a hilly town located about 110 km away from Imphal, the diverse group of people living in this trade town do not engage in agricultural activities and have no agricultural produce for the market. Nor are there industries or factories. Hence, the people here belonging to various communities such as Kuki, Tamil, Nepali, Meitei, Punjabi, Telugu, Bihari, Marwari and Muslim (Pangal) are totally dependent on border trade.

During normal days, the town is flooded with foreign goods from across the border. All types of essential commodities, including food, are brought from Myanmar due to the proximity and easier reach compared to Indian products which are transported from far off states and priced higher.

Eighty per cent of daily use goods available in the markets in Moreh are foreign goods brought from Myanmar, be it made-in Myanmar or Thailand or Chinese goods. From small scale to bulk, locals in the town carry out transaction of trade, including import and export of goods, for their livelihood. Also, people from different parts of the state and the country come to Moreh for business and all types of commercial purposes. In fact, the town in flooded with imported goods from Myanmar that the name ‘Moreh’ goods has become synonymous with Myanmar products. Among the locals, all goods from Myanmar sold in Manipur are popularly identified as Moreh goods.

Over 30 per cent of the state depends on this border trade. All types of legal and illegal trade activities operated in Moreh. Hundreds of labours depend on daily wages. Small and petty traders from different parts of the state earn their livelihood from the Moreh market.

But due to the closure of the border gates between India and Myanmar, people could no longer venture out for any trade activity. When the border was opened, many tourists from different parts of the country also visited the town. Hotels, restaurants and other food huts and taxi drivers made good business. Now, with all major business outlets locked down and left with no alternative means of livelihood, different communities living in the town are driven by the fear of poverty and hunger. They have no means of earning other than border trade. Now, as all sources of income is closed, most of the daily wage earners, auto drivers, taxi drivers, businessmen and transport owners look for government initiatives and help.

In view of the dire circumstances, many leaders and civil voluntary organisations of the town have appealed to the state government for reopening of border gates for few hours on routine basis. Recently, the Meetei Council Moreh, the All Community Development Organisation Moreh (ACODOM) and the Indo Myanmar Workers Forum in different press statements, appealed to the state government for opening of the border and sought necessary help for the people of this town.

As the border remain closed and statewide lockdown is enforced till August 31, the once crowded town looks deserted. All business sectors, hotels (folding & lodging), shops and market remain closed. Taxis and auto services have stopped. People have no ways for earning their livelihood. Only few people go to the forest for cutting firewood and some people go to the rivers for fishing. But this could hardly provide them their daily needs. It is no sustainable option.

The government provides some quotas of rice under the National Food Security Act 2013 (NFSA) and the Pradhan Mantri Garib Kalyan Yojana (PMGKY) rice. But, this could hardly fulfill the needs of a family. So families below the poverty line (BPL) are facing hunger and their sufferings are mounting during this Covid-19 pandemic.

However, while normal trade has suffered a setback as the border is sealed and the Indo-Myanmar gates closed, there are reports of frequent seizure of smuggled goods. Illegal activities continue despite heavy security deployed in the international border area. Huge consignment of smuggled foreign goods from Myanmar are reported seized by the security personnel on a daily basis. All types of foreign goods are still filtering into the town from the porous international border. Questions are being raised by many people. How such huge consignment of foreign goods are being brought across the sealed border. The illegal goods frequently seized include drugs, Win cigarettes, Godzilla mosquito coils, candles, Myanmar tin fish among others.

This illegal movement of goods from Myanmar to Moreh often moves forward to Imphal and other parts of the state. Hence, Such unchecked movement of goods and transport can push the spread of the virus from town to town. It poses health concern to the people of the entire state. Vested business interests may render hundreds of lives at risk during this pandemic time.

Expressing serious concern, CVOs and society leaders in the area have appealed to the authorities concerned and the people to stop this illegal activities through which some people are earning huge profits. While smugglers and drugs traffickers are making huge profits during this pandemic time, the struggle to survive for the poor and daily wage earners is real. Coming forward to the rescue of the poor, several social workers and CVOs have distributed relief food materials and other essential items to poor households but all the needs of hundreds of poor families cannot be provided by them alone. People in the town have now sought the government's help to ensure viable alternatives and sustainable measures for the poor people in the region while the borders are still sealed and lockdown is enforced.

It may be recalled that what was once barter trade between Manipur and Myamar, the Union Ministry of Commerce signed the Indo-Myanmar Border Trade Agreement on January 21, 1994 in New Delhi underscoring the strategic importance of Moreh, as a gate to Southeast Asia. Subsequently, the border trade was inaugurated on April 12, 1995 by the then Union Minister of State for Commerce. As per the agreement, initially only 22 items were listed in the tradable items between the two sides which gradually increased to 62 items. Once again, taking into consideration the strategic importance, the Government of India in 2015 allowed “normal trade” and since trade increased substantially. Apparently, reciprocating to the policy (now Act East Policy), the Myanmar Government officially opened the land port at Tamu district bordering Moreh town on August 8, 2018.

As per  the Department of Trade Commerce and Industries, the business transaction between Manipur and Myanmar was over Rs.15 crore in between 1995 and 1996. However, various agencies estimated that nearly Rs.1,000 crore worth of goods exchanged illegally at the border town.

The town that once thrived with trade and lured visitors of all types now resembles a ghost town now with empty streets, bare markets and empty corners. Amid the struggle for survival, many non-local labours have left the town and gone back to their respective states as there is no means of earning. The ones left behind wait for government's help to cope with the Covid crisis which is here to stay.