The game has created quite a trend by nearly getting a five star review on Google Play Store. 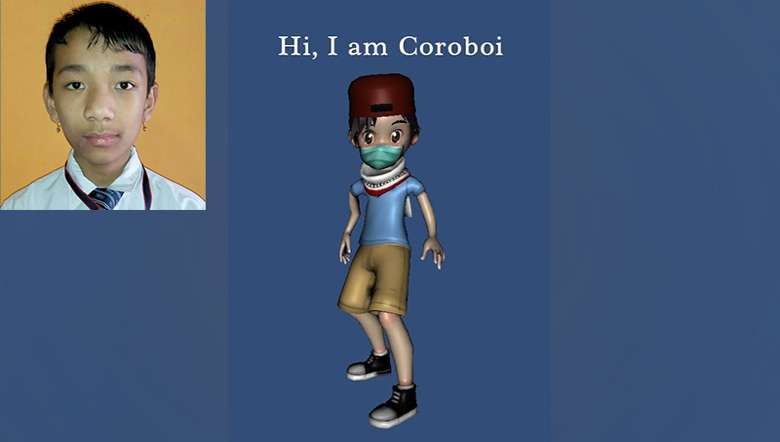 When the lockdown was imposed and people were advised to stay at homes, this 13-year-old boy Baldeep Ningthoujam is among those whose minds could not stay at a place. But what makes him different from the others is that Baldeep was busy developing mobile games while others simply struggled to spend time. He recently developed an android based mobile game called 'Coroboi'. This is Baldeep’s second contribution to the world of android devices found on Google Playstore.

Baldeep from Kha-Naorem Leikai Imphal West, the eldest son among the three children of Kishan and Nebedita Ningthoujam, has an interest in programming and acquiring new sets of skills. He is currently a student of Premier English School, Canchipur. Baldeep started off early in computers with his uncles Rakesh and Amujao Ningthoujam who have a strong background in IT and running a company LPM Technology Pvt Ltd.

During a conversation with the Imphal Free Press, Baldeep expressed, “My uncle started teaching me Photoshop, DTP works and programming since childhood.” He said his uncle helped him motivate in trying his hands on developing games. As schools were closed and there was a lot of time to try on new things, they wanted him to do something unique in the state. "Thus they encouraged me and with their guidance, it has become fruitful," Baldeep told the IFP.

Coroboi is an android based game which is newly launched by Baldeep. In the game, he portrays a boy wearing a mask and a ‘Leirum Phee’ (a Manipuri traditional cloth) running to get vital nutrients while avoiding the COVID-19 virus and the police which costs the player 5,000 points if caught.

The game has created quite a trend by nearly getting a five star review on Google Play Store. The download count has crossed 5,000 as shown by Play Store while the exact number of downloads is 7,129 as per information provided from the whizz-kid's personal Facebook page where he keeps on updating about his work.

He said that he uses computer software such as Blender and Unity to develop the 3D model of his character and the environment. For Coroboi, he uses C# to program his game. Not only C#, Baldeep has learned many other programming languages and tools throughout his exposure to this digital world, some of which are JavaScript, PHP, Kotlin, JAVA, HTML, CSS, Bootstrap, jQuery, and ASP.net.

Baldeep aims to improve his game Coroboi so that the users get a smoother experience while playing. He said, “I found some issues which cause the game to lag while playing and an update will be released tonight. It will make the gaming experience more exciting”. Before taking on a new project, he aims to improve the Coroboi, a game where Leirum Phee can be promoted, he expressed.

Besides developing mobile games, the 13-year-old boy who is regarded as one of the youngest software developers in Manipur has tried his hands on various other platforms like website designing and building other software by giving an extra hand to his uncles.

Telling that he manages time for his school activity, he added, “For programming, my uncle helped me and I also watch YouTube tutorials to learn other skills”.

However, he has not laid eyes on creating software relating to online classes. He rather aims to improve his game as there are many other kinds of software available before.

Yes, he is a 13-year-old boy with certain sets of skills that can do wonders. His story should inspire the coming generation to manage time and skills to achieve their long lost dreams while adjusting to the new normal.

It may be mentioned that E-Thabak, an online job searching platform developed by Baldeep was officially launched in September 2019 Consumer Affairs Food and Public Distribution, Manipur, Minister Karam Shyam.