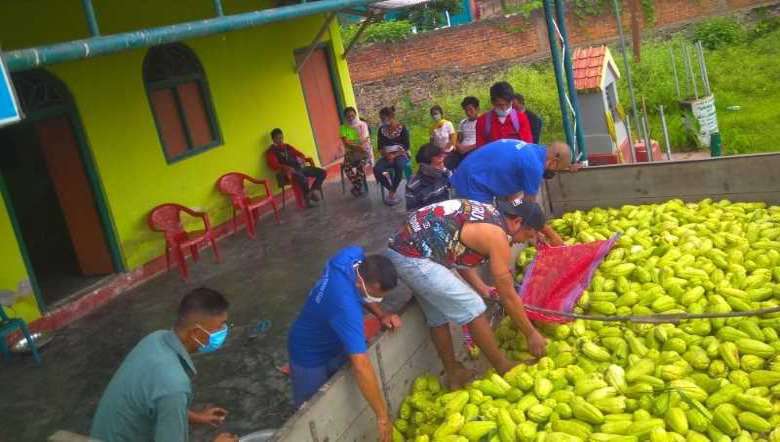 In view of the hardships being faced by the public due to COVID-19 pandemic, exchange of goods among BYCY club S Saijang villagers was held at the premises of the BYCY club on Wednesday.

The villagers of S Saijang village brought a Shaktiman truck loaded with squash and gifted them to the club members for distribution to the localities. On the other hand, the club members of BYCY handed over a sum of Rs 5,000 for the villagers and medicines like paracetamol, painkillers, antibiotics etc. were also given to the villagers. It is reported that the exchange programme was carried out under the supervision of the S Saijang village chief Lunmang.

Village chief Lunmang expressed that the exchange was done with the view to lessen the hardships being faced by the valley people during this lockdown and curfew period. He also hoped that the exchange would bring oneness and closeness towards one another among hill and valley people, the same could bring to feel that we were all from one family, nothing could separate us.

The president of BYCY club, Khomdram Prafullo, wished that the event would bridge more the gap between the hill and valley people.

General secretary, Sanjoi Hidam told that the gifted items will have to be distributed not only to one and all of the locality, but also to the families of neighbouring localities too. He also added that the distribution will be started from Thursday morning. He appealed to the people “to help one another at the time of grief and distress without any thought of being hill and valley people, keeping in mind that we are all brothers and sisters and of the same family. The bond of love must be tightened at any cost.”