Nothing compares to enchanting heights of Himalayas! 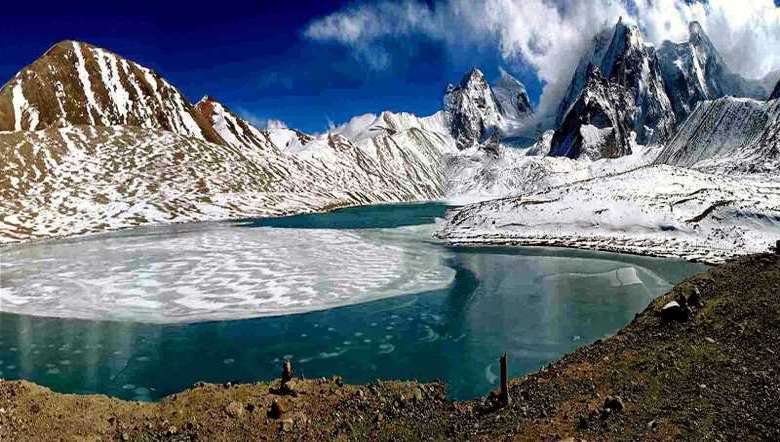 The never-ending blue-black ranges at a far distance, as seen from Chandigarh Siliguri or Bhalukpong (Assam-Arunachal border)... stunning, captivating and aweinspiring... just the first glimpse of the Himalayas as we approach it from the plains takes one's breath away!

And as we started ascending upon the mountain through the winding roads, the sight of the rich and exotic varieties of flora and fauna was sheer pleasure. Be it various types and colours of flowers, rivers and cascades and animal-bird life was feast to the eyes!

The Kalka-Shimla railway journey takes the cake! As if the excitement of passing through more than 100 tunnels is not enough; the cute little stations of Solan or Barog, nestled on the edge of the Himalayas and surrounded by colourful gardens, are nothing but sheer delight!

The Darjeeling Himalayan railway, however, holds another charm of its own passing through the tea plantations, shops and bazaars of Kurseong or Sonada, the world famous Batasia Loop and India's highest railway station Ghoom enveloped by fog and clouds!

While the icy peaks and snowfields of Sonmarg to Yumthang are irrestible; the kingdom of multicoloured shrubs right upon the hard rocks, seen above the treeline as in Arunachal Pradesh, are also no less attractive!

And the treeless yellow terrain of cold desert Ladakh is a matter of another unique dimension! Not to forget the independent grazing of Yaks and Bactrian camels in virgin slopes of Arunachal-Sikkim and Ladakh respectively!

The Himalayan towns also emerge as typical characters in their own right! While Shimla, Mussorie, Darjeeling, Gangtok or Tawang are perched high above the  mountain top and spreading across the slopes and surrounding peaks; Pahalgaon, Kulu, Paro are nestled in a beautiful valley with Lidder, Beas, Paro Chhu rivers cutting through it respectively. While Nainital or Pokhara is centred around a large lake surrounded by lofty mountains on all sides; many parts of Srinagar or Kathmandu can compel us to believe that we are residing right on the plains with no ranges or hilly terrain in sight!

The Sacred places - And what to speak of the religious shrines here! Even an atheist will feel God, given the geographical backdrop of the settings and overall environment of the religious sites! Be it the icy Shivalinga within the caves of Amarnath to the Kedarnath Temple on the lap of the snow ranges or the Punakha Dzong on the confluence of Pho Chhu and Mo Chhu rivers in Bhutan to the exquisite monasteries at Bomdilla and Tawang --- our hearts and minds simply surrender to the beauty of the nature so as to pay unconditional obeisance to the Almighty!

Diversity in Food -Is there any greater cultural kaleidoscope in the whole world than the Himalayas through its diversity in food dance attire, thanks to the multiplicity and assimilation of ethnicities and tribes? While Rogan Josh or Jasha Maroo can fly the typical gastronomical flag of Kashmir Valley or Bhutan respectively; but Ladakh to Arunachal Pradesh get intrinsically binded by the common thread of Thukpas and Momos passing through the kitchens of Tibet-Nepal-Sikkim-Darjeeling-Bhutan!

Sons of the soil - Among the Himalayan regions of India, Nepal and Bhutan; all are absolutely peaceful barring occasional flare-ups in Kashmir, Nepal and Darjeeling Hills of West Bengal. Yes, some socio-cultural, geographical and political factors are at play behind such disturbances; but it has not polluted the inherent humanity embedded within the gallant hearts of the Himalayan people. Be it the warmth towards fellow community or lending of cooperative hand to the alien tourists --- the magnanimous nature of the sons and daughters of Himalayas has hardly undergone any erosion or corruption.

The Shikara operator in Dal Lake to the cab driver in Gangtok --- all are at cheerful best to the tourists. And far from trying to go "one-up" upon the "adversary"; the bus/cab drivers promptly stop and sacrifice their right of way and instead try to award priority of passage to the vehicle approaching from the opposite side whenever a sharp bend upon a narrow stretch is required to be negotiated!