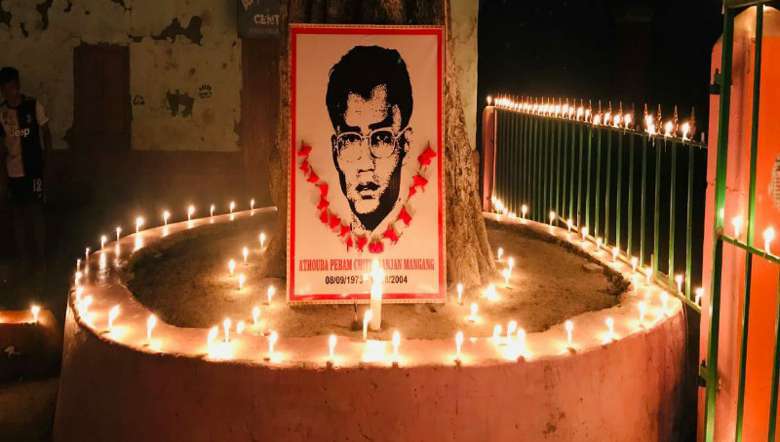 The MSF president was speaking at the 16th Students’ Martyrdom Day, 2020 held at Takhellambam Leikai ground, Imphal this Sunday.

Sazad said the day is observed every year in the state in commemoration of the supreme sacrifice of Athouba Pebam Chittaranjan Mangang.

After Manipur was forcibly merged to India in 1949, the Central government imposed AFSPA, 1958 in the entire state, claiming that the entire state is a disturbed area in 1978. Since then central forces have been taking various advantage under the draconian Act, he added.

Under the said Act, the central forces arrested number of people under suspicion and without trial in court they were killed. Demanding to withdraw AFSPA completely from Manipur, Chittaranjan sacrificed himself as human torch on August 15, 2004 at Bishnnupur bazar. Although he was given treatment, he succumbed to his injury on the next day, August 16, Sazad said.

On his last breath Chittaranjan had expressed that India got independence on August 15 but it is the starting of a dark day for Manipur, Sazad added.

He further appealed to the people to support the initiatives of MSF to withdraw the Act from Manipur completely and to follow the footsteps of Chittaranjan.

Mentioned may be made that AFSPA,1958 was withdrawn from the Imphal municipal area by the then chief minister Okram Ibobi.

As a part of the observation conducted under the SOP of the state government due to COVID-19, after the opening song presented at the headoffice of MSF, floral tributes were paid on the statue of Chittaranjan located at Athouba Pebam Chittaranjan Mangang memorial complex, Bishnupur bazar.

In the late evening at about 6 pm, candles were lighted at Takhellambam Leikai (TYC) ground which is the birthplace of Chitaranjan. Candles were also lighted at various gates of the entire state in commemoration of the departed soul.