The 129th Patriots’ Day was observed in Manipur Thursday, commemorating the Anglo-Manipur War, 1891. 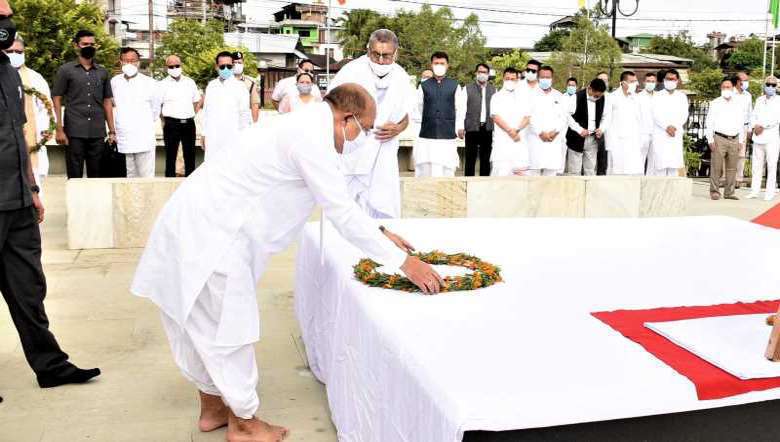 Chief Minister N Biren pays floral tribute to the patriots of the state during the Patriots' Day observation held at Hicham Yaichampat, Imphal West on August 13, 2020

Chief Minister N Biren Singh Thursday reiterated that the outcome of the Naga peace talks will not affect the integrity of the state. The chief minister stated this during the state level function of Patriots’ Day in commemoration of the war heroes of Manipur of the Anglo-Manipur War, 1891.

CM N Biren assured that Centre will seek the opinions of the people of Manipur before inking the final agreement between Government of India and NSCN (IM). “The Naga peace talks will not affect the integrity of the State,” he said.

In the wake of the renewed Naga talks, the Civil Voluntary Organisations (CVOs) has once again come out strongly against any decision that could affect the territorial integrity of the state.

Certain CVOs have urged the state leaders to make their stand clear on the issue adding that people will not compromise any agreement that could jeopardise the integrity of the state.

The state today observed Patriots’ Day in memory of those heroes who sacrificed their lives in the Anglo-Manipur War, 1891.

On this day, August 13, 1891, Manipur prince Bir Tikendrajit and General Thangal, were hanged publicly in Imphal now known Bir Tikendrajit park (or Sahid Minar) by the British for waging war against the empire. The day is considered as a red letter day in the history of Manipur and is annually observed as “Patriots’ Day”.

On the same day, Niranjan Subedar, Kajao and Chirai Naga were also hanged till death inside the Manipur jail. The British deported Maharaj Kulachandra and 21 others to Kalapani, the present day Andaman and Nicobar Islands.

Deputy chief minister Y Joykumar Singh, cabinet ministers, MLAs, chief secretary, DGP, top civil and police officials and others attended the function.
Speaking to the media persons, the chief minister said that this day reminds us of the supreme sacrifice made by our forefathers for freedom and sovereignty of our motherland and this sense of patriotism should not be forgotten by the present generation.

The observance began with ‘Prabhat Phery’ commencing from DIPR Office, Keishampat at 4:00 am. Patriotic songs were played imbibing the sense of patriotism and martyrdom at various locations of Imphal East and Imphal West districts.
Marking the Patriot’s Day, the state also announced a list of police personnel and officers who will be given awards by the Chief Minister’s Police Medal for Gallantry and Manipur Chief Minister for outstanding Devotion to Duty.